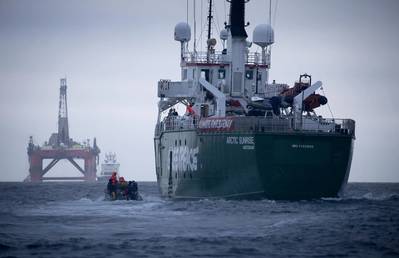 A BP drilling rig heading to an oilfield in the British North Sea has been forced to turn away twice over the past two days as a Greenpeace vessel protesting climate change tries to hamper its progress.

The high-sea chase is the latest step in Greenpeace's nine-day effort to stop the 40,000 tonne Paul Loyd JNR rig from reaching the Vorlich oilfield to start its drilling campaign.

The vessel left Cromarty Firth, north of Inverness, Scotland on Friday after police twice removed activists who had climbed and spent several days on one of the rig's legs.

But it was forced to turn away twice from its destination over the past 48 hours as Greenpeace's Arctic Sunrise vessel followed it, the activist group said.

The Paul Loyd JNR is currently heading west towards Peterhead and away from the Vorlich field, according to Greenpeace and www.marinetraffic.com ship tracking website.

"We are determined to stop BP drilling new oil wells in the North Sea," Sarah North, Greenpeace International climate activist on the Arctic Sunrise said in a statement.

BP slammed Greenpeace and said it had secured an injunction against the Arctic Sunrise.

"Given Greenpeace's repeated interference and reckless actions directed at our lawful business and their continued illegal defiance of court orders and police action, we have ... this injunction as a precautionary measure to protect the safety of people and operations," a BP spokesman said in a statement.

BP announced last year plans to invest 200 million pounds ($251.16 million) to develop the Vorlich field in the central North Sea which holds some 30 million barrels of oil and gas equivalent.

It is expected to start production in 2020 with an output of 20,000 barrels per day, according to BP's website.