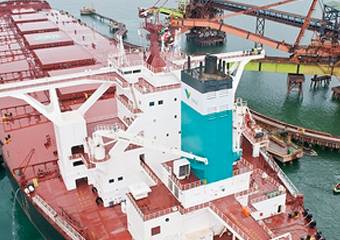 A Brazilian federal court on Thursday ordered the suspension of activities at Vale SA's Port of Tubarão because of pollution concerns, halting the world's largest iron ore exporter's ability to ship more than a third of its output.
The ruling by the court in Vitoria was made as part of a police investigation at the giant man-made port as Vale comes under increasing pressure over its environmental record in Brazil after a dam burst at a mine run by its Samarco joint venture in October, killing at least 17 people.
The court order paralyzed imports and exports at one of the world's most important iron ore terminals. Its docks loaded 82.5 million tonnes of iron ore destined for steelmakers around the world in the first nine months of 2015, Vale said.
Vale's preferred shares, the company's most traded class of stock, reversed early gains of nearly 5 percent to fall more than 1 percent after the closure was confirmed.
In addition to iron ore, Tubarão handles coal imports and steel exports for the Brazilian unit of ArcelorMittal SA , the world's largest steelmaker.
Police have said activities at its iron ore dock and coal dock have resulted in iron ore and coal dust polluting the surrounding water and contributing to pollution in other areas, including nearby beaches.
Judge Marcus Vinicius Figueiredo de Oiveira Costa said in his ruling the suspension would remain in effect until Vale and ArcelorMittal fixed the pollution problems.
The judge said that failure to obey the closure order would result in a daily fine equal to 2/30ths of Vale and ArcelorMittal's monthly revenue.
ArcelorMittal said the operation of the port was Vale's responsibility. It also handles coal imports for other steelmakers in Brazil's interior, who receive the coal by rail.
Vale said in a statement that it will take all judicial measures necessary to guarantee the re-opening of the port. It said the closure will have serious economic impact on Espirito Santo state, where Tubarão is located, and on Minas Gerais, the state where iron ore exported at Tubarão is mined.
Vale already faces a 20 billion real ($4.89 billion) lawsuit brought by Brazil's federal government over the October breach of an iron ore tailings dam at Samarco Mineração SA, Vale's 50-50 joint iron ore venture with Australia's BHP Billiton Ltd.
A court spokeswoman said the order does not affect state-run oil company Petroleo Brasileiro SA's fuels terminal at the site. Some areas of Espirito Santo have recently run out of fuel because of Petrobras logistics problems.
Petrobras did not immediately respond to requests for comment.
Vale has had a long and torturous relationship with the government and environmentalists in Vitoria. Since it opened in 1966, many have complained of dust and other air pollutants coming from the port, which also houses a steel mill, iron ore pellet plants and giant iron ore storage patios.
($1 = 4.15 Brazilian reais)
(Reporting by Jeb Blount and Marta Nogueira; Additional reporting by Alberto Alerigi in Sao Paulo; Editing by Daniel Flynn, David Gregorio and Bill Trott)