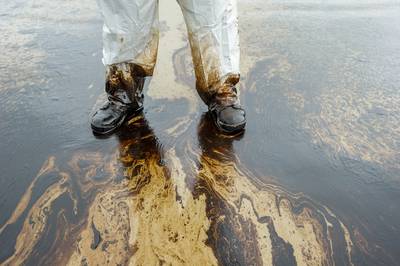 Crude oil smudges have been spotted at some Brazilian beaches in the northeast state of Ceará, the country's navy said on Monday, almost two months after the area was hit by another oil slick.

That was part of a broader spill, whose origin remains a mystery, that stained hundreds of beaches on Brazil's northeast coast between September and November, threatening marine life, tourism and fishing.

The navy said samples of the new spill were being sent for analysis to a marine studies institute, adding that sailors, volunteers, members of environmental agency IBAMA and others were recovering the oil traces from the beaches.

Tourism operators in the community of Caetanos de Cima, in Ceará state, also expressed concern about the spill.

"There was a lot of oil in the beaches in the morning. It seems to be more than we saw the first time that this happened, in early November," said Helena Soares, who works with community tourism in the area.

Rivelino Cavalcante, an ocean researcher at the Federal University of Ceará, told news website G1 that a large quantity of the same oil that appeared on beaches earlier this year still lay in the seabed and was moving to shore because of ocean currents.

Brazilian government officials have said that tests indicated Venezuela as the probable origin of the oil. The country dismissed that assertion.