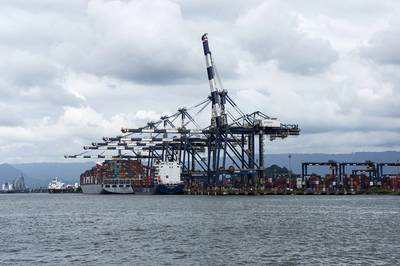 The Brazilian government will send the first doses of COVID-19 shots to immunize Santos port workers, with vaccinations slated to begin this week at Latin America's largest port, according to a statement from maritime agent Williams on Wednesday.

Williams said Infrastructure Ministry Tarcísio de Freitas made a public commitment to vaccinate the workers, citing an audio message dated May 23 that was shared publicly by the National Federation of Port Operators (Fenop).

The move is a response to growing pressure from the workers, who threatened to go on strike if the immunization did not occur by May 31 at Santos -- a key port to Brazil's commodities exports.

In Argentina, port workers vowed to hold a 48-hour strike starting at midnight after paralyzing agricultural exports from the country last week with an initial work stoppage over demands they be vaccinated against COVID-19.

According to a separate video message posted in Fenop's social media networks, officials at the infrastructure and health ministries vowed to start vaccinating 150,000 port and airport workers ahead of schedule.

The officials said distribution of the shots aimed at immunizing these workers was scheduled to begin in 48 hours.