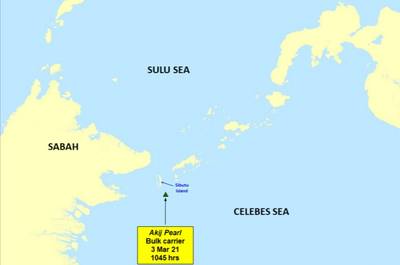 A Bangladeshi flagged bulk carrier was approached by suspected attackers off the coast of the Philippines on Wednesday.

The ReCAAP ISC said it received information from the Philippine Coast Guard about the incident involving Akij Pearl off Sibutu Island, Tawi-Tawi, Philippines.

While the bulk carrier was underway, an unidentified speed boat with three perpetrators on board attempted to board the ship at about 10:45 a.m. local time on Wednesday. The master reported the incident to the Philippine Navy Littoral Monitoring Station (LMS). There was no mention if the perpetrators were armed.

As the Sulu-based Abu Sayyaf Group/Kidnap-for-Ransom Group (ASG/FRG) elements are based in the area of the incident, the ReCAAP ISC urges ship master and crew to exercise extra vigilance when transiting the waters off Eastern Sabah and in the Sulu-Celebes Seas, in particular waters off Sibutu Island.