Bulker Breaking Up and Leaking Oil After Collision off Gibraltar 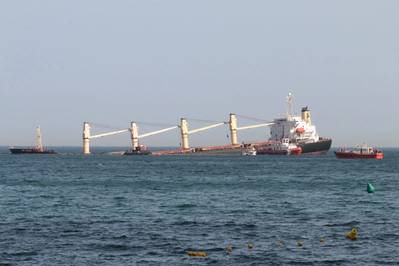 A bulk carrier that collided with an LNG tanker off Gibraltar started leaking fuel oil, authorities in the British overseas territory on the southern tip of the Iberian peninsula said on Wednesday.

The collision on Tuesday forced the closure of the Gibraltar port for four hours. It was later fully reopened.

The hull of the bulk carrier OS 35 broke, authorities said, but the vessel has not separated into two parts.

"There has been a substance leak from the vessel as a result of the movement arising from its break. Initial investigations indicate that this is lube oil," the Gibraltar government said in a statement.

"Current evidence suggests the fuel on board is well contained and it is hoped that offloading can begin tomorrow."

The collision happened as the vessel OS 35, loaded with steel bars and carrying over 400 tonnes of fuel, was moving to exit the bay. The Marshall Islands-flagged ADAM LNG arrived in Gibraltar after unloading in Malta. It remains at anchor near the place where the collision took place.

The Gibraltar Port Authority directed the OS 35 to the east side to ensure it could be safely beached to minimize the risk of the vessel sinking. Its 24-strong crew were evacuated.