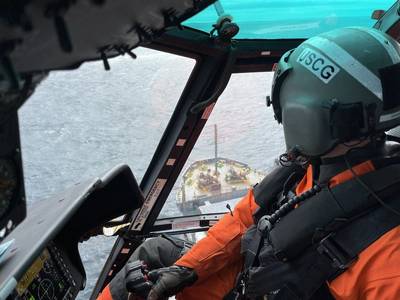 An ailing crewmember was airlifted from a Panama-flagged bulk carrier of the U.S. West Coast.

The U.S. Coast Guard said it received a report Saturday evening of a 29-year-old male who had suffered from a stroke and related medical complications aboard the vessel Malto Hope approximately 1,000 miles west of the Oregon coast.

Watchstanders at the 13th Coast Guard District Command Center recommended the ship transit closer to shore to be within range for a medical evacuation from a Coast Guard helicopter.

Once the vessel was within response range, Coast Guard watchstanders directed the launch of an MH-65 Dolphin helicopter aircrew from Coast Guard Air Facility Newport to rescue the man.

The aircrew arrived on scene approximately 57 miles offshore Newport, Ore., on Monday shortly after 10:30 a.m., hoisted the man and transported him to awaiting emergency medical services at Air Facility Newport in stable condition.