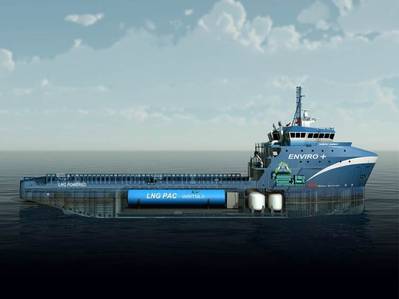 Harvey Gulf International Marine, LLC reported that its dual fuel offshore support vessel (OSV) M/V Harvey Energy has today bunkered LNG as a marine fuel. The news makes Harvey Gulf the first North American owner/operator of a dual fuel OSV to bunker LNG as a marine fuel, as well as the first to complete a truck to vessel transfer of LNG.
The bunkering took place at a shore-based terminal owned by a subsidiary of Martin Midstream Partners L.P. in Pascagoula, Miss. Participating in the activities alongside the crew of the Harvey Energy was the U.S. Coast Guard, ABS, Wartsila, Martin Energy Services LLC, state and local agencies and GCSG.
Shane Guidry, Chairman and CEO of Harvey Gulf, commented, “Today’s historic event is an example of Harvey Gulf’s commitment to their customers and the environment to provide the most affordable, innovative, environmentally friendly technology solutions to meet their business demands.”
Harvey Gulf said the cool-down process lasted approximately 12 hours as the desired tank temperature and pressure utilizing 3,800 gallons of nitrogen was achieved. The LNG bunkering was then completed within a few hours of cool-down. The Harvey Energy will next proceed to LNG trials before delivery.
The Harvey Energy, built at GCSG in Gulfport, Miss., is based on the Vard Marine 1 311 design and is 310x64x24.5ft powered by three Wartsila 6L34DF dual fuel gensets providing 7.5MW of power fueled by Wartsila’s LNGPac system. The Harvey Energy is U.S. Flagged Subchapter I and L, SOLAS compliant and is classed by the ABS as +A1, OSV, +AMS, +DPS-2, +ACCU, UWILD, FFV-1, ENVIRO+, GP, GFS (Dual Fuel Diesel) E. With 5,150 tons of deadweight, the vessel is capable of carrying 253,000 USG of Fuel Oil, 18, 000 Bbls of Liquid Mud, 1,600 Bbls of Methanol, 10, 250ft3 of Dry Cement and 78,000 USG of LNG fuel.
In concert with the Harvey Energy, Harvey Gulf is preparing to operate the first LNG marine fueling facility in the United States, located at its vessel facility in Port Fourchon, Louisiana.

A cargo of Russian oil bound for Cuba's Matanzas terminal has been diverted to a smaller port, following a spectacular fire…