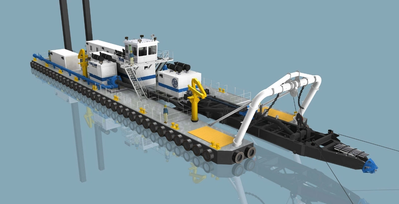 At 194 feet long and 41 feet wide, the General Marshall will have a maximum digging depth of 60 feet, a dredge pipe diameter of 18 inches, and a 300 horsepower cutter. Manufactured by DSC Dredge in Reserve, La., it will boast an overall horsepower of 3,005 horsepower.

“Our cutter suction dredge fleet continues to grow in order to meet the demands of the coastal market,” stated Maxie McGuire, president of Callan Marine. “The General Marshall will add increased capabilities and response for maintenance and improvement dredging, allowing us to serve more clients in the public and private sector.”

The General Marshall will join the ranks of Callan Marine’s other dredges: the 32” General MacArthur, the 28” General Bradley, the 18” General Pershing, the 16” General Pat-ton and the 12” General Eisenhower.