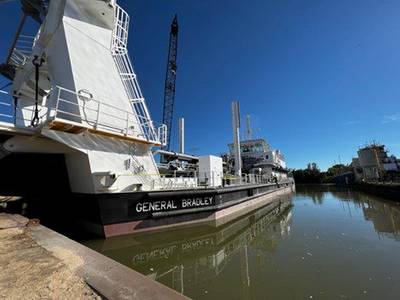 At 341 feet in length and 52 feet wide, General Bradley will have a maximum digging depth of 60 feet and a dredge pipe diameter of 28 inches. Constructed at Halimar Shipyard in Morgan City, La., the diesel-electric driven General Bradley will be equipped with three ABC 12DZC engines that supply 9,260 horsepower combined. It will also feature advanced production automation and monitoring systems.

“Our commitment to service along the Gulf Coast is unmatched,” stated Maxie McGuire, President of Callan Marine. “The General Bradley demonstrates our belief in the ship channels and river systems that move our nations cargo and the need for maintenance dredging for years to come. This exciting dredge features the latest technology and expands the capabilities of Callan’s fleet substantially.”