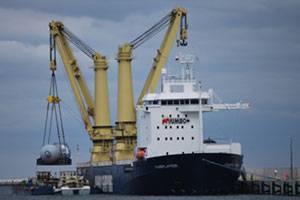 Discharging the three giant reactors from Fairplayer was arranged so as not to interrupt operations at the container berths.

Since it opened in 2007, the new DCT Gdansk container terminal has had several opportunities to demonstrate its versatility, notably with the transhipment of motor vehicles from deepsea to feeder car carriers and even the handling of a cruise vessel. It has also handled several heavylift vessels including, of course, the vessels that delivered its ship-to-shore cranes and RTGs.

More recently though, the terminal has handled a number of very heavy pieces destined for the adjacent Gdansk oil refinery, operated by Group Lotos, and further shipments are programmed for later in 2009. This current shipment and a second, scheduled for July, are being handled by the Polish freight forwarder Hermes, which is headquartered in Gdynia.

Lotos is expanding and upgrading the Gdansk refinery under the so-called 10+ Programme, which complies with the policy of the Polish Government concerning the petroleum sector. This requires Group Lotos to improve the power security of Poland by providing continuity of energy raw material supplies. Within the 10+ Programme, a number of technologically advanced petroleum installations are being constructed, which will enhance the efficiency of petroleum processing. The development of the systems involves advanced technologies that guarantee a high level of desulphurisation of petroleum products and minimise the negative impact on the environment.

The first shipment was delivered at the beginning of May by Jumbo Shipping’s heavylift vessel Fairplayer and included three reactors, two weighing approximately 805 tonnes each and the third weighing 1,170 tonnes.  The three units each exceeded 28m in length.

The method of discharging used multi-wheeled trailers that were transferred onto a barge using DCT Gdansk’s ro-ro ramp.

On the first day of discharge (4 May), the barge was brought alongside Fairplayer, which was moored on the main quay, and using one of her two 900-tonne capacity cranes, the first reactor was placed directly onto the trailers. The loaded barge then moved back to the ro-ro ramp, allowing the reactor to be rolled ashore and placed on the quay. On the following day, the whole exercise was repeated and the second reactor was placed on the quay.

On the third day, using both of her cranes working in tandem, Fairplayer discharged the third and heaviest reactor on to the trailers and the barge then sailed directly to the refinery site, allowing Fairplayer to depart, her job accomplished.  The first two reactors will be collected later by the barge and trailers from DCT Gdansk’s terminal.

In July, another reactor, this time weighing over 1,300 tonnes and measuring over 34m in length, is due to move over the DCT terminal.

DCT Gdansk already has experience of handling this type of shipment. In August 2008, a reactor weighing 700 tonnes was transhipped from the heavylift vessel Annette onto a pontoon for on-carriage to the Gdansk refinery.

DCT Gdansk SA is a Polish registered company majority owned by GIF II (Global Infrastructure Fund II), a specialist fund managed by a member of the Macquarie Group of Companies, headquartered in Australia.

Its new terminal offers year-round ice-free access to container vessels with draughts of up to 15m, providing perfect conditions to serve as a transhipment hub to St Petersburg and the rest of the Baltic. Its three post-Panamax gantry cranes are able to work vessels carrying containers 18-across on deck. A ro-ro facility has also been provided.

The rail terminal, operated by DCT Gdansk, is located adjacent to the marine facility and a major logistics/distribution park is now in the planning stage, making DCT the ideal gateway to Poland and Eastern & Central Europe.