Port of Durban to Triple Capacity, Compete with Suez Canal 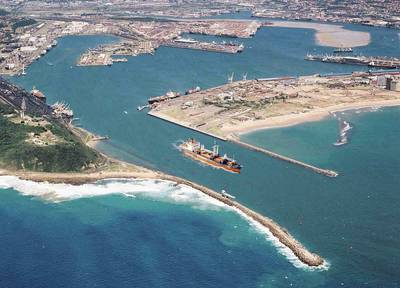 Durban, South Africa's busiest port, has started a project to triple capacity and encourage vessels to skip the Suez Canal and sail around the Cape of Good Hope, Bloomberg reported today.

"It's more cost effective to sail modern, large container vessel around the Cape than through the Suez Canal," Mark Gregg-MacDonald, an executive at state transport company Transnet OSC Ltd., told Bloomberg Friday. The project will allow the port to handle larger container ships and should contribute $1.4 billion to the South African economy, Gregg-MacDonald said.

Shipbuilders continue to build larger and larger ships, while ports continue to undergo expansion to increase capacity. Earlier this week, the 18,300 TEU Munkebo Maersk became the largest ship to ever sail up the Thames.