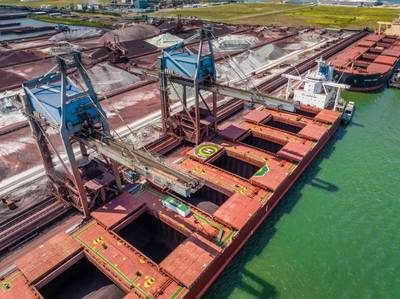 The Baltic Exchange's main sea freight index jumped to a more than two-month high on Tuesday, propelled by gains across vessel segments, particularly the larger capesizes.

The overall index, which factors in rates for capesize, panamax and supramax shipping vessels ferrying dry bulk commodities, rose 77 points or 4.3% to 1,865 points, its highest since Aug. 1.

The Pacific basin remained considerably sluggish, while the Atlantic basin showed fixing activity supporting higher prices for the capesizes and good demand coming from grains for the panamxes, Allied Shipbroking said in a weekly note.

Russia's grain harvest is set to grow by about 5 million tonnes a year, after its incorporation of four Ukrainian territories, Agriculture Minister Dmitry Patrushev said.

The dry bulk index gaining month-on-month after touching an over two-year low in late August despite a tough steel market backdrop highlights "the tight supply balance of ships, which we expect will remain tight over the coming years due to stricter regulatory hurdles and a low newbuilding orderbook," Jefferies said.