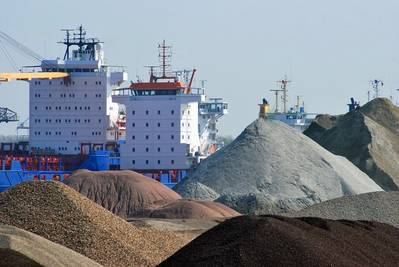 The Baltic Exchange's main sea freight index fell to an over three year low on Friday, with the capesize segment marking its biggest weekly loss since March 1999.

The Baltic index, which tracks rates for capesize, panamax and supramax vessels ferrying dry bulk commodities, fell 19 points, or 3.3%, to 557 — lowest since April 2016.

The index has lost more than 26% this week, registering its biggest weekly percentage loss in nearly a year.

The index registered its 31st straight session of declines as well as its biggest weekly percentage loss since 1999, down by 77%.

"The dry bulk market will remain under pressure during first quarter of 2020, as fixture activity into Asia slows ahead of Lunar New Year holiday, and Vale iron ore production uncertainty continues to weigh on sentiment and spot rates," Randy Giveans, vice-president, equity research at Jefferies said in a note.

The index has fallen over 20% so far this week.

The supramax index fell 3 points to 543.

(Reporting by Anjishnu Mondal in Bengaluru)

CMA CGM suspects a cyber attack affecting its servers led to a data breach, the global shipping line said on Wednesday as it continued to restore onli