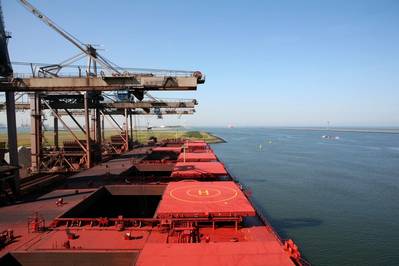 The Baltic Exchange's main sea freight index, tracking rates for ships carrying dry bulk commodities, rose to a fresh over three-month peak on Friday as capezise rates rallied.
The overall index, which factors in rates for capesize, panamax, supramax and handysize shipping vessels, rose 24 points, or 2.05 percent, to 1,196 points - its best since early December.
The index, which has risen for the 13th straight session, was up about 40 percent since its previous fall on Feb. 28, when it broke a nine-session winning streak.
The capesize index rose for the 12th straight session. It jumped 148 points, or 6.53 percent, to 2,413 points.
Average daily earnings for capesizes, which typically transport 150,000-tonne cargoes such as iron ore and coal, were $1,006 higher at $17,763, the highest level since Nov. 22.
The panamax index was down 21 points, or 1.86 percent, at 1,108 points.
Average daily earnings for panamaxes, which usually carry coal or grain cargoes of about 60,000 to 70,000 tonnes, dropped $167 to $8,914.
Among smaller vessels, the supramax index rose 2 points to 879 points, while the handysize index was flat at 508 points.


(Reporting by Swati Verma in Bengaluru; Editing by Maju Samuel)