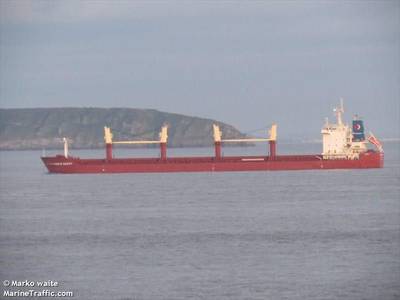 In pleading guilty, Vadim Humenyuk, of Izmail, Ukraine, admitted that he was intoxicated while serving as the 590-foot long Rainbow Quest while in San Francisco Bay and preparing to sail to South Korea. The plea was accepted by U.S. Magistrate Judge Thomas S. Hixon.

The investigation began on Tuesday, December 10, 2019, when a San Francisco Bar Pilot contacted Coast Guard Sector San Francisco Vessel Traffic Service personnel reporting that the captain of the Rainbow Quest appeared to be intoxicated. Investigators of the U.S. Coast Guard administered sobriety tests to Humenyuk late on the evening of December 10, and the early morning of December 11.  After Humenyuk failed the sobriety tests, he was charged with operating a non-recreational vessel under the influence of alcohol, in violation of 46 USC 2302(c), a Class A misdemeanor.

Humenyuk faces a maximum statutory penalty of up to one year of incarceration, an additional year of supervised release, and a fine of up to $100,000. Humenyuk’s sentencing hearing is scheduled for January 3.

The case is being prosecuted by Special Assistant United States Attorney Alexandra Shepard. This case is being investigated by the U.S. Coast Guard.

“I appreciate the outstanding collaboration from the San Francisco Bar Pilots, Customs and Border Protection, and the U.S. Attorney’s office for ensuring safety on our waters, and protecting the maritime public, property, and environment,” said Captain Byrd. “The Coast Guard and our partners will not tolerate operating a vessel under the influence from any mariner, much less a commercial ship captain preparing to get a large cargo ship underway in San Francisco Bay.”