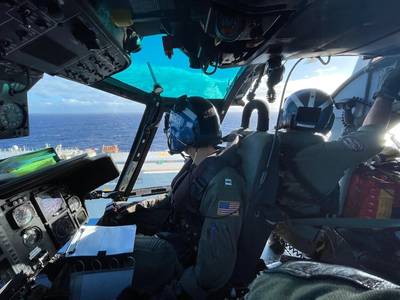 At 9 p.m., Thursday, the Cayman Islands-flagged Brilliant Ace notified Joint Rescue Coordination Center (JRCC) watchstanders in Honolulu that a 50-year-old crewmember on board appeared to be suffering from his medications not working.

Duty flight surgeons from the Coast Guard were consulted and recommended a medevac based on the concern that the mariner’s condition could rapidly deteriorate if left untreated. The vessel was instructed to set course for Oahu where Coast Guard air assets would be ready to rendezvous.

U.S. Coast Guard crews conducted the medevac in 23-mile-per-hour winds and six-foot seas on Friday, and a Coast Guard Air Station Barbers Point MH-65 Dolphin helicopter aircrew transported the mariner back to the air station where ambulances were waiting to transport him to Queen’s Medical Center. He was reported to be in stable condition.

“Our air crews train regularly to ensure they are prepared for this type of situation,” said Lt. Richard Sullivan, command duty officer for Joint Rescue Coordination Center Honolulu. “We were able to launch the rescue crew swiftly and bring the mariner back to shore so he could receive the proper medical care he required.”