Car Carrier Prices Are Hot and Getting Hotter 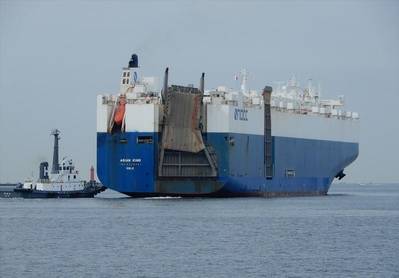 Secondhand sales prices exploded in Q2 as operators battled to secure tonnage. Twenty-two-year-old Asian King (6,400 CEU, Dec 1998, Hyundai Heavy) sold for an eye watering $23 million in June—a remarkable price when you consider the Perseus Liberty (6,400 CEU, Jan 1999, Imabari) of very similar age and size sold for $13.8 million just two months earlier. Such price inflation has inevitably led to talks of a super cycle buoyed by a hot charter market. Firmed rates of $30,000 per day for midsized 5,000 CEUs, and $35,000 per day for 6,500 CEUs are earning (EBITDA) owners 8 million to 10 million per annum after opex. It’s a seller’s market; buyers beware.

Low deliveries up to 2024
Current market conditions could last into 2024 based on an underlying lack of tonnage. Looking back to 2010, a healthy number of deliveries hit the water at 8% of the fleet excluding units less than 1,000 CEU. However, by 2013 deliveries had more than halved stabilizing around the low 20 vessel mark through to 2018. Before declining into single figures from 2019 prior to COVID. The current orderbook at 5% projects four deliveries in 2022, 10 in 2023 and 19 in 2024 (Figure 1). These are low numbers for the next couple of years and 2022 looks particularly ominous with COVID continuing to weigh on supply. The foundations for short supply can be originated back to 2016 when orders averaged just five vessels per year until 2021. Owners have reacted this year with a respectable number going on a major shopping spree, but they are paying a high price for leaving it late.

BEV demand growth
Battery electric vehicle (BEV) demand is accelerating across the developed world and is likely to have a positive net impact on global cargo miles for vehicle carriers. President Joe Biden’s recent executive order pushing for half of all U.S. auto sales to be battery electric by 2030 was seen by many as an industry defining moment. Canada went a step further mandating 100% compliance for all light vehicles and trucks by 2035, promising $1 billion of initiatives to encourage take up. Similar packages have been launched elsewhere in Europe including here in the U.K. where zero emission car sales have increased by 73% this year. BEVs, including hybrids, now hold a 14% share (7% in 2020) of all light vehicle sales in Europe. Back in March, Volkswagen predicted 70% of its European vehicle sales will be battery electric by 2030. Latest forecasts from auto analysts pinpoint a 40% share globally by 2030 versus 7% today (3% in 2020). Whatever way you look at it, BEV demand will continue to increase this decade and into the next. We should expect similar percentage jumps for electric units shipped on vehicle carriers.

BEV trade growth has the potential to significantly impact voyage earnings for a major share of the current car carrying fleet, because electric cars weigh 20% more than conventional diesel/petrol equivalent models. This means less cars can be loaded onboard a typical PCTC whenever there is a high volume of BEV bookings, because the average density per car unit has increased, eating into deadweight capacity. Essentially, PCTCs with low deck strengths will be disadvantaged as BEVs start to dominate over time, diminishing the earning opportunity of the asset. While modern PCTCs and LCTCs equipped with stronger decks from 0.3t/m2 upwards, will hold more value due to the higher earnings opportunity derived from the better stowage factor. Vessels trading to used car markets such as Africa are less exposed to this headwind. However, this is already an issue for ships operating on major East West liner routes delivering finished new cars to European and North American markets with long term ramifications for fleet development. Logically, demand for stronger decked ships will increase. Cargo miles will also receive a credit in the short to midterm, as more capacity is required to carry the same volume of seaborne cars around the world. This is assuming global demand remains relatively static, whilst BEVs continue to take share in sales and exports.

Toyota has been forced to cut global production by 40% for September because of the chip dip crisis, leading to a slump in their share price which spread to Nissan and Honda. U.S. retail sales figures also turned negative in July weighing on sentiment. It’s possible we will see some softening in cargo mile demand in Q4. However, the fundamental imbalance driven by low supply versus recovered demand is unlikely to change in the midterm (Figure 2). Supply chains will continue to be choked by the stop start nature of the pandemic, restricted by slow terminal operations and ongoing vessel delays at congested ports as the new normal, reducing liner frequency and therefore the overall supplied capacity available for ocean exporters. China’s strict policy on COVID by shutdown as seen at Yantian and Ningbo ports this year, taught us that consumer goods remain highly sensitive to operational stops. Until the world is vaccinated, further disruption is to be expected.

Looking a little further into 2022, the supply demand imbalance could widen if the microchip shortage eases while COVID lingers, enabling more BEVs to be finished and exported across seas. Which is plausible noting Hyundai coming out last month declaring the worst is behind us. A firming of pent up cargo demand from auto dealerships looking to replenish depleted stocks unfulfilled on top of their usual monthly seaborne import orders would create a compounding effect of growth on growth. That would really pump up rates and asset values.

An average number of sales have completed this year because owners are reluctant to let go of tonnage in a supply starved market, anticipating higher values. Some operators have chartered out their owned PCTCs enticed by lucrative, better earnings from a booming rate environment. Values for 10- and 20-year-old PCTCs have shot up following some exceptionally high sold prices paid by buyers with few alternatives. Car carrying assets are hot property, but next year could get hotter. 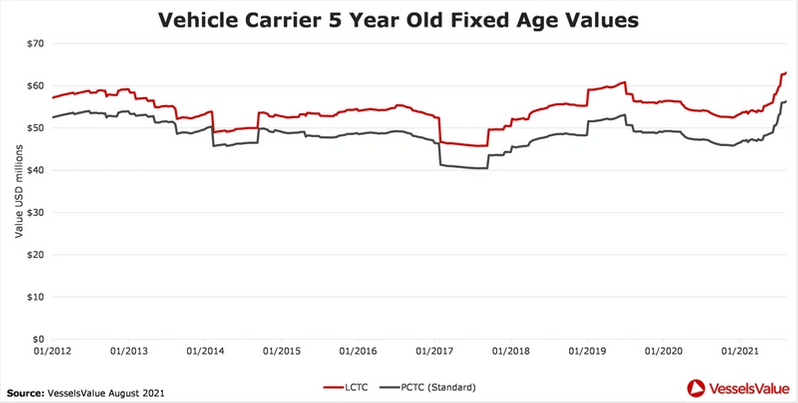 The Author
Dan Nash is head of RoRo at VesselsValue.

A number of barges have gone aground in the Lower Mississippi River due to low water levels, the U.S. Coast Guard said.There…