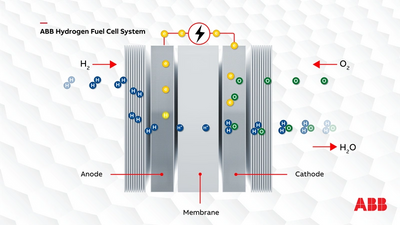 As the maritime world rapidly evolves to incorporate increasingly clean and efficient power sources onboard ships at sea, the cruise industry is emerging as a clear leader in the sector, driven by the high-profile nature of its ships and the often pristine environments to which they traverse.
With that, ABB announced that it will deliver the first fuel cell system to Royal Caribbean, a pilot program in which the RCL ship will be the world's first fuel cell system on a luxury cruise ship.
The pilot installation, including control, converter and transformer technology from ABB, will generate 100 kW of energy, and has been fully developed, marinized, assembled and tested by ABB Marine & Ports. ABB selected an FCvelocity
proton exchange membrane (PEM) pure hydrogen fuel cell engine from Ballard Power Systems for its pilot system.
“Our goal is to take the smoke out of the smokestacks, said Harri Kulovaara, EVP of Maritime and Newbuilding, Royal Caribbean Cruises Ltd. “We are dedicated to innovation, continuous improvement, and environmental
responsibility, and using fuel cell technology gives us the opportunity to deliver against all three of these pillars.”
“At ABB, we believe that the next generations of vessels will be electric, digital and connected. Fuel cell technology matches exactly that," said Juha Koskela, Managing Director, ABB Marine & Ports. "Fuel cells have significantly higher efficiency than combustion engines and allow energy to be concentrated more densely than in petroleum fuels. If you use renewables to produce the hydrogen the entire energy chain is clean and truly emission free."