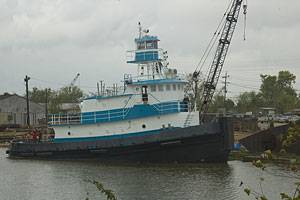 “This boat was five years in the planning,” said LA Carriers owner, Russel Plaisance, as he looked over a tug that he will place into operation by the end of December. The new vessel, to be named Lady Loren, will be the seventh vessel in the LA Carriers fleet. The boat is building at Dickie Adams Lockport Fabrication Inc.

Plaisance first went to work on his dad’s fishing boat at 17 and by 21 he had his masters license. Several decades have passed since that time and each year has taught him a bit more about the maritime business and boats to serve it.

“I keep my business diversified,” he explained. “We do $10 or $11m gross per year including some business with the oil industry, but we do a little of everything else as well. We barge pipe and we once even towed baseball dirt from Houston to Tampa Bay for spring training. This new boat has a contract to tow corn syrup from Memphis to Tampa Bay for Cargill.”

That ability to diversify is also reflected in the design details of the Lady Loren. Some of these are modifications of a boat that he had built at Lockport Fabrication in 2007. The main engines are three Tier 2 compliant Cummins QSK19 diesels rated for 660 HP each to give a total of 1980 HP turning three 63 by 66-inch propellers in nozzles. This meets the horsepower requirements of clients while maintaining the shallow draft demanded by the inland waterways and shallow water oil wells.

Simplex Dripless shaft seals assure that there will be no danger of oil seeping into the highly regulated Florida waters. A large fidley over the engine room is fitted with a two-ton traveling crane capable of lifting any of the 1.5 ton engines and moving it to a single centrally located hatch. This will permit an engine to be changed out in about six hours in order to keep the boat working and earning money.

On deck a split drum winch is powered by a 110 HP diesel located inside the fidley. The larger of the two drums will handle 2000 feet of 1.5-inch wire rope while the other drum will take 1200 feet of 1.5-inch wire. A pair of stainless-steel tow-pins is tapered to their centers to help hold the tow wire in place. Stainless is also used on the aft cap rail. For working barges in the pushing mode the tug has a fendered ten-foot model bow. A pair of cheek blocks on the aft deck will accommodate one-inch plasma face lines that will double back to bits near the tugs bow. An elevated secondary wheelhouse will ease the pushing of empty grain barges with their high covers.

The Lady Loren will be the sixth Cummins-powered boat in the LA Carriers seven-boat fleet. The horsepower and hefty towing system will also allow the tug to contract tows to Mexico and other Central American destinations. Speaking of the contract to tow corn syrup from Memphis, Tennessee to Tampa, Florida, Plaisance said, “I am competing against the rail lines but they can’t beat the 2800 tons of product that this boat can tow in two barges.”