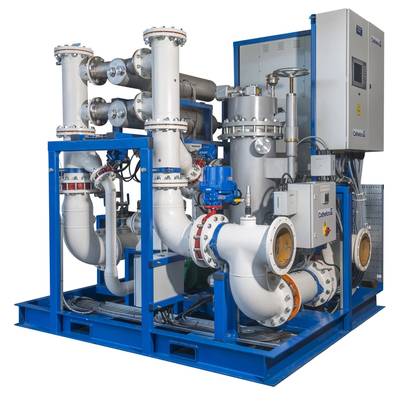 Cathelco have supplied a ballast water treatment (BWT) system for the C.C. Pacifique, a steel barge which is being converted into a cable laying vessel for Coastal Carriers BV of the Netherlands.

The order for the system was placed by V.Delta, part of V.Group, the international ship management company who are managing the conversion of the 120 meter vessel which is taking place in Singapore.
The BWT system has a capacity of 300 m3/hr and has been supplied as a self contained skid mounted unit. It is based on a combination of filtration and UV technology and can operate effectively in the most challenging water conditions.
“We have worked successfully with V.Group in the past through the supply of other types of Cathelco equipment. The BWT project was scheduled with a tight deadline and were able to hold discussions with the V.Group team and produce drawings within a very short time span,” said Robert Field, Cathelco’s technical director.
The system received IMO Type Approval in May 2014 and went on to gain AMS Acceptance from the U.S. Coast Guard a few months later.
“We are one of the few BWT system manufacturers using UV technology that has no restrictions on the salinities in which ships can operate. Our system has been approved and accepted to work in marine, brackish and fresh water,” said Peter Smith, sales director of Cathelco.
Cathelco’s BWT systems are available with capacities from 34m3/hr to 1,200m3/hr. In order to maintain its effectiveness, the system automatically adjusts to different sea water qualities. Unlike some systems which simply measure turbidity (amount of suspended sediment), the Cathelco system uses a UVT sensor to measure UV light transmittance – the amount of UV radiation actually passing through the seawater.
According to Cathelco, this is a more reliable parameter for calculating the UV dose as well as ensuring that power is used economically. Another important factor is the use of stepless power control.
The latest version of the Cathelco BWT system called the Evolution is currently being tested to the ‘live/dead’ standard demanded by the U.S. Coast Guard with the aim of gaining Type Approval by the third quarter of 2017.
The independent laboratory appointed to supervise the USCG Type Approval testing program is Lloyds Register.
Shipboard testing will commence in July/August 2016 and it is anticipated that all of the test results will be submitted to the U.S. Coast Guard for approval by the first quarter of 2017.