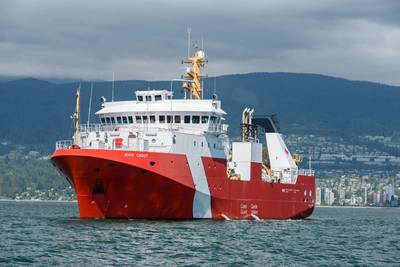 Over the next 10 days the 63.4-meter-long ship will be put through its paces during rigorous full-scale exercises where specialists from Seaspan Shipyards, representatives from the Coast Guard and key equipment suppliers will conduct a series of performance and seaworthiness tests. The tests ensure that the ship operates as designed and that all systems – including mechanical, electrical, hydraulics, fishing and laboratory, communications, navigation, as well as fire and safety systems – are fully operational.

“Moving from launch to sea trials in record time, particularly during a global pandemic, is a testament to the incredible talent and determination of the Seaspan Shipyards team, and intense collaboration and teamwork from our supply chain partners and the Canadian Coast Guard,” said Seaspan Shipyards CEO Mark Lamarre.

On completion of sea trials, the future CCGS John Cabot will be prepared for an anticipated delivery to the Canadian Coast Guard in September before sailing to her home port St. John’s, N.L. where she will take her place in the Coast Guard fleet alongside sister ships CCGS Sir John Franklin, delivered in December 2019 and now stationed in Victoria, British Columbia, and the CCGS Capt Jacques Cartier, delivered on June 2019 and currently stationed in Dartmouth, Nova Scotia.

Lamarre said the shipyard is achieving dramatic productivity and efficiency improvements with each ship delivered. “These are exactly the outcomes intended by the architects of Canada’s National Shipbuilding Strategy, and they are the hallmarks of a modern shipyard that is firing on all cylinders,” he said.

The OFSV is fully equipped to support Fisheries and Oceans scientists in the collection and analysis of data on Canada’s marine ecosystems and the impacts of climate change. This floating laboratory features a full suite of state-of-the-art systems, including a deployable sensor-laden drop keel, high-tech fishing trawls and four science labs — a wet lab, a dry lab, an ocean lab and a control lab.

The OFSVs support scientific research through work such as performing fishing and acoustic surveys of fish and invertebrates, collecting information on the abundance and distribution of marine species, and collecting data on marine ecosystems and the impacts of human activity on fisheries resources and ecosystem health.

The OFSVs, although primarily focused on science and research, also have the capability to support search and rescue, and environmental response and operations as required.