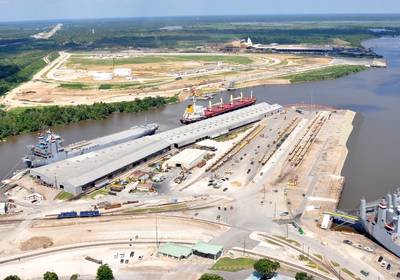 Photo courtesy of Port of Beaumont

2016 marks the 100th anniversary of the Port of Beaumont, a major deepwater port in Southeast Texas.  A series of celebrations and public events began October 20th, when the Greater Beaumont Chamber of Commerce presented the port with its Spindletop Award for outstanding corporate citizenship.  A record crowd of 800 people were on hand for the 112th annual Chamber meeting, where keynote speaker, Texas Lieutenant Governor Dan Patrick, saluted the port for 100 years of service.

Port officials have planned a number of events over the next six months to commemorate the Centennial.  A Centennial history book will be released in early summer.  Other activities in celebration of the history of the port will be announced during the next few months.

How did the once narrow, winding and shallow Neches River in Beaumont, known for riverboat trade and floating timber, evolve into one of the busiest waterways in the nation?
In 1909, the newly established Beaumont Navigation District secured funds to build a ship channel that would allow ocean-going vessels to reach the city of Beaumont.  The first nine- foot channel allowed passage only by shallow-draft boats.  Funds were matched by the government through the Rivers and Harbors Act of 1911, and construction on the deepwater channel began.
In 1913, the City of Beaumont created a Wharf and Dock Commission, and steps were made for the development of international trade at the port.  In the spring of 1916, near the foot of Main Street, the city completed its first wharf and welcomed its first ocean-going ship.

Over the years, bonds, earned revenues and grants have allowed the port to expand and improve infrastructure, gaining the Port of Beaumont the reputation as one of the most competitive and innovative ports on the Gulf Coast.
Since its founding, the development of the port and its ship channel, the Sabine-Neches Waterway, have helped transform Beaumont from a sleepy little timber town into an industrial Mecca.

The growth of the energy industry in Southeast Texas, combined with public and private investment, allows the Sabine-Neches Waterway to be recognized as one of the most productive ship channels in the world, handling some 71,000 commercial transits and 100 million tons of cargo annually.  Most of the cargo is crude oil, and places the waterway third on the list of the nation's busiest waterways.
The Port of Beaumont has offered 100 years of uninterrupted service and owes its growth and success to the vision of forefathers who worked diligently to attract international commerce to Beaumont.
“The Port of Beaumont has been successful, in part, because of its flexibility and ability to respond to changes in the international marketplace,” said CEO and Port Director Chris Fisher. “Once known almost exclusively for handling bagged agricultural products, the port has evolved into a highly diversified marine facility with the ability to efficiently handle a wide variety of import, export and domestic traffic.