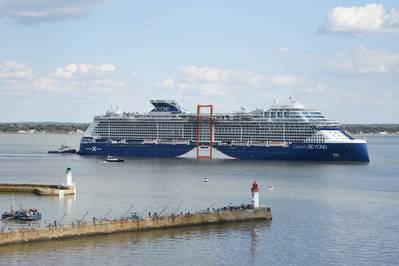 Celebrity Cruises’ newest cruise ship Celebrity Beyond has departed the Chantiers de l’Atlantique shipyard in Saint-Nazaire, France en route to Southampton, U.K. where the newbuild is slated to commence its maiden voyage later this month.

The third in a series of five Edge Series luxury cruise ships ordered by Royal Caribbean's Celebrity Cruises—each reportedly worth $1 billion—the 140,600 GT Celebrity Beyond was delivered on April 6 and departed France on April 15.

The 327-meter-long vessel was ordered in 2016, and first steel was cut in January 2020, but its delivery was delayed due to shipyard closures and delays caused by the COVID-19 pandemic. The ship is powered by Wärtsilä engines with ABB Azipod thursters.

“Celebrity Beyond is a true new ship. We have worked hard, in a spirit of strong collaboration and even during the pandemic, to achieve this result,” said Laurent Castaing, General Manager of Chantiers de l’Atlantique. “Celebrity Beyond is one of the exceptional ships that will be remembered.”

The ship is captained by Kate McCue and manned by 1,400 crew members from over 60 different countries. It has space for 3,937 passengers at maximum capacity.

Celebrity Beyond’s maiden voyage will depart on April 27, 2022, from Southampton, England, for a 10-night Western Europe cruise visiting Bordeaux, France; Lisbon, Portugal; and Seville, Malaga, Palma de Mallorca and Barcelona, Spain. The vessel will then offer a variety of Mediterranean journeys including nine-night Italian Riviera and France itineraries and 10-night Greek Isles itineraries through early October, when she then heads to the Caribbean.

Celebrity Cruises’ President and CEO Lisa Lutoff-Perlo said, “With its innovative offerings that reach far beyond expectations from some of today’s most talented designers, artists and creative minds, we believe that Beyond speaks to the growing trend of people seeking new luxury experiences that are personalized, effortless and meaningful. We are seeing a continued desire to travel as business steadily increases, and we see Beyond leading the cruise industry into the next era of luxury.”

Chantiers de l’Atlantique cut first steel for Celebrity's fourth Edge Class vessel, Celebrity Ascent, in November 2021 ahead of planned delivery in late 2023. Construction and delivery dates for the series' fifth ship have not been announced.