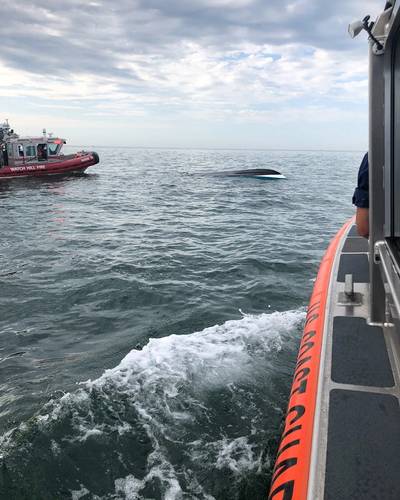 First Coast Guard District command center crews, from Maine to Northern New Jersey, have a new tool to help distressed mariners come home to their families after being out to sea.

The i911 program allows for watchstanders to use a mariner’s cellphone number to assist in finding their location for Coast Guard rescue crews to locate them faster. Once the number is entered, the mariner receives a text message authorizing them to share their location with the U.S. Coast Guard. Once shared, the internal cell phone’s GPS, which uses satellites to pinpoint the mariner’s location, is displayed on a screen for watchstanders to aid in the search for them.

This software is already available to first responder agencies across the country. It was developed by Callyo Inc. and is a free service for all first responders, including the Coast Guard.

“What’s cool about my job is that I get to learn about new technology, and how we can apply it to help the Coast Guard,” said Lt. Anne Newton, Coast Guard Research and Development Center. “The second I saw Callyo’s presentation, I knew this would help command centers tremendously.”

Newton worked in a several command centers before her time at the R&D Center and understands the struggle command center crews face when trying to find someone they know is counting on the Coast Guard to bring them home. 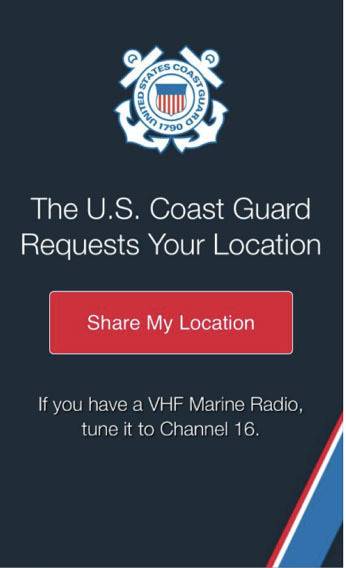 A photo of what pops up on your cell phone to share your location with the Coast Guard when in distress. (U.S Coast Guard photo by Nicole J. Groll)

Depending on the cell phone service, i911 can determine locations of distressed mariners from up to 15-20 nautical miles offshore. During the pilot period, more than 38,000 search and rescue cases across the contiguous United States were analyzed, and it was found that 89 percent of all SAR cases took place within 20 nautical miles off shore.

Coast Guard Sector Long Island Sound, located in New Haven, Connecticut, was the first to test the system. It was a success and subsequently all five First Coast Guard District Sector command centers became part of the pilot program.

It’s not a perfect system though, there are some challenges.

The biggest challenge watchstanders at Sector Long Island Sound found was teaching distressed mariners how to turn on their location services. The i911 system will not work without it.

“It’s really cool technology and already helped us on numerous occasions with search and rescue,” said Joshua Olsen, a command duty watchstander for Sector Long Island Sound. “Sometimes, we just need to talk people through how to share their location.”

During the pilot period, the i911 system assisted in bringing several mariners home including three people on an inflatable raft. They were blown out to sea and couldn’t paddle to shore due to high winds and strong sea currents. Armed with only their cell phones, i911 pinpointed their location about 6 miles offshore and rescue crews were able to rescue and bring them home safety. 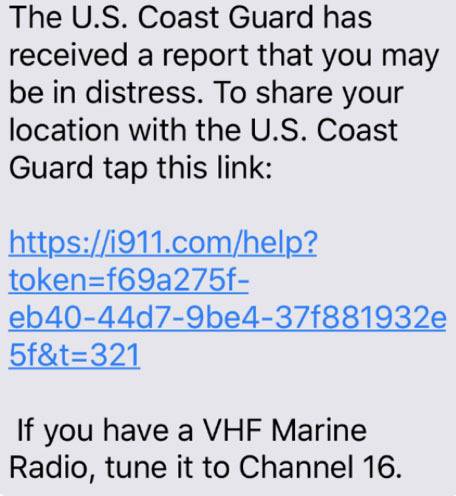 Verbiage of the text message the i911 system sends for mariners to follow to share their location with the Coast Guard. (U.S. Coast Guard photo by Nicole J. Groll)

Chief Petty Officer Andrew Case, a command duty officer at Sector Southeastern New England, located in Woods Hole, Massachusetts, really liked having this tool to use for search and rescue.

“It’s like Rescue 21 for the phone,” said Case. “It greatly decreases the time we spend looking for someone and gets the rescue crews out faster.”

Case also said that doesn’t mean mariners should not have a VHF radio on board. The most reliable and traditional means of communication for mariners to use when in distress is VHF channel 16.

This is just one of many cases where people were brought home safe during the pilot program in the Northeast. This program will hopefully be a game changer in the 2020 recreational boating season.

The pilot program, which ran from May – November 2019, is now authorized for Coast Guard command centers across the entire service and U.S. as of March 20, 2020.

The Biden-Harris Administration on Friday announced new funding aimed at improving ferry service across the U.S. The U.S.