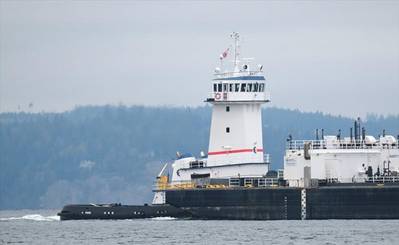 With the completion of this expansion, Centerline expands its existing California bunkering operations, adding Saltchuk’s six bunker barges as well as its established customer contracts in the California market. Centerline now operates bunker barges in the ports of Los Angeles and San Francisco, part of a national fleet of marine transportation vessels serving customers along the West Coast, Gulf Coast and East Coast.

“The completion of this significant acquisition achieves Centerline’s goal of strengthening our industry leadership in safe petroleum transportation,” said Matt Godden, President and CEO of Centerline. “Our mariners set the standard for excellence when it comes to safe and versatile ship refueling. With Saltchuk’s California bunker barges now part of Centerline’s fleet, we are in an even stronger position to serve our customers in this important market.”

Centerline Logistics, formerly known as Harley Marine, was founded in 1987 as an oil transportation business focused primarily on providing ship refueling and general petroleum transportation. The company, with operations along the West Coast (including Alaska), New York Harbor and the U.S. Gulf Coast, is also active in the storage of petroleum products, ship assist and escort, the transportation of general cargo and rescue towing. Over the course of 2020, Centerline made the decision to pursue a strategy focused on strengthening its main service offering: petroleum transportation.

Throughout the ownership transition period, Centerline and Saltchuk partnered together closely to maintain continuity for customers, employees and vendors.