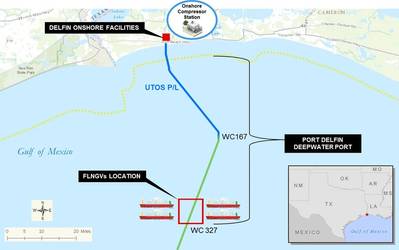 But industry veteran Jones told Reuters in an interview that Delfin is also tapping unnamed Chinese banks to fund its ambitious $8 billion as the current global supply overhang in liquefied natural gas (LNG), with bumper exports also expected from Australia and Qatar, makes Delfin’s target of a final investment decision (FID) in 2018 challenging.
“We’d like to make an FID next year, but we have to be realistic,” said Jones, a pioneer of spot crude oil trade in the 1970s.
“The numbers don’t add up,” said Jones, in Beijing as part of a trade delegation accompanying U.S. President Donald Trump on his visit to China. “If we could see crude (oil) stay in the $55-60 range for a sustainable period of time, and start creeping to the higher 60s, then LNG will find its level adequate for the whole industry.”
A rapidly growing spot market worldwide for LNG, allied with global oversupply of the super-chilled fuel for at least the next few years, is transforming an energy business that traditionally counts on 20-30 year purchase agreements to bankroll projects.
Jones’ comments came as Delfin announced the signing of a memorandum of understanding to supply 3 million tonnes a year of LNG from 2021 to China Gas Holdings Co Ltd (0384.HK), one of China’s most active city gas distributors, now operating 140,000 kilometers of pipelines, according to the company’s president.
“It’s a very significant challenge to secure long-term buyers given the rise of spot market and oversupply,” said Jones, a founder-shareholder of legendary trading business Marc Rich & Co.
“We’re open to either or both types of investment...banks for debt and some strategic investors who want LNG partially under their control,” said Jones. “We’ve seen a lot of interest from Chinese banks to finance shipping.”
Delfin said in June it would jointly develop the Louisiana project with Golar (GLNG.O), a provider of floating FLN technology. Jones said Delfin will draw on Golar’s experience in tapping Chinese banks for loans, without identifying institutions by name.
Delfin aims to start sending gas in 2021 using its first vessel located 50 miles off the coast of Cameron Parish, Louisiana, with eventual supplies reaching 13 million tonnes a year from four liquefaction vessels. Jones said Delfin will look for an Asian shipyard, possibly in Singapore, South Korea or China, to build four vessels each costing about $2 billion.
“Building an LNG vessel in a controlled environment, an Asian shipyard, is going to result in very good economics,” said Jones.
That shipyard could become a stakeholder in the vessels, Jones said.
Canada’s Enbridge (ENB.TO) holds about a 5 percent stake in the basic company, excluding vessels, after Delfin bought an existing gas facility, including onshore and subsea pipelines, from it for a fraction of what a new pipeline would cost, said Jones.
Meanwhile Delfin also signed on Wednesday a memorandum of understanding with Chongqing Oil and Gas Exchange to help develop a trading platform to the connect domestic Chinese market with international markets, emulating the established benchmark Henry Hub in the states.
Chongqing, in western China next to the country’s largest natural gas province of Sichuan, operates an extensive gas grid.
Reporting by Chen Aizhu; Editing by Kenneth Maxwell