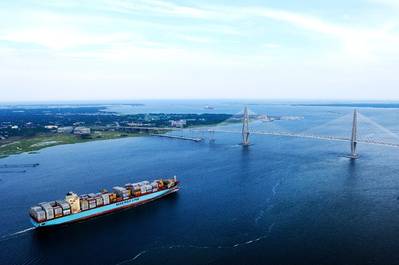 The Charleston Harbor Deepening Project was named one of six “new starts” and received $17.5 million in construction funding in the U.S. Army Corps of Engineers (USACE) Fiscal Year 17 Work Plan released today, allowing construction on the project to begin this fall as scheduled.

Charleston also received $16.1 million in operations and maintenance dollars, which provide for the routine maintenance dredging of the harbor necessary for construction begin. Collectively the funds allocated in the Work Plan allow Charleston to continue moving forward and preparing for construction.
“This is monumental news for the Charleston Harbor Deepening Project, and we are appreciative to the Trump Administration, Governor McMaster and the entire South Carolina congressional delegation for their efforts to ensure the project was included in the Corps Work Plan,” said Pamela Lackey, SCPA Board Chair. “Their unanimous support and tireless efforts continue to move our project forward without delay.”
The largest contract for the project will be let this fall, utilizing federal dollars in combination with the $300 million in state funding already set aside for the project.
“The significance of this funding for the timeline of our deepening project cannot be overstated – it is tremendous news for Charleston,” said Jim Newsome, SCPA president and CEO. “By the end of the decade, we will achieve 52 feet of depth and be the deepest harbor on the East Coast, a depth advantage that will add significant capability in the Southeast, the fastest growing port region in the country. We are grateful for the leadership of our congressional and state delegations and look forward to a continued, productive partnership with the USACE as the project progresses.”
The project has moved rapidly through the USACE SMART Planning process. Only six years ago, in May 2011, the project reached its first milestone with a $150,000 allocation in the USACE Work Plan to study the need and justification for the Charleston Harbor to be deepened beyond its current depth of -45 feet.