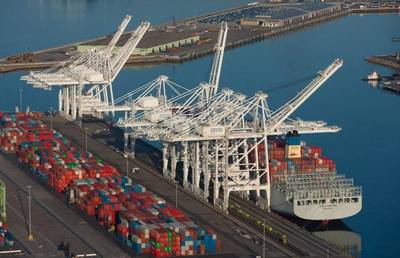 Twelve people, including one firefighter, sustained minor to mild injuries after a container ship leaked a hazardous material in the Port of Long Beach in Southern California, WSJ reported.

A 6,000-gallon container on the ship began leaking the liquid Sunday morning, Officer Brian Fisk with the Long Beach Fire Department said.
Workers who were exposed to the leaking chemical, identified as propyl acetate, experienced shortness of breath, said Davonte Marrow, a spokesman for the U.S. Coast Guard.
The leak was contained and a 1,000-foot perimeter was established as a precaution. A dispatcher for the Port of Long Beach said the ship with the leaky container was the Harbour Bridge.
The Coast Guard identified the liquid as propyl acetate, primarily used as a solvent. It was unclear how much spilled or what caused the leak.
Local and federal officials are investigating the spill and monitoring cleanup efforts.