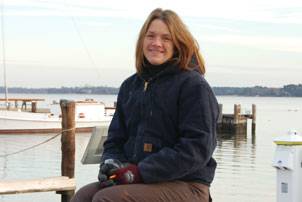 Jennifer Kuhn of Seattle, Wash. has joined the Chesapeake Bay Maritime Museum (CBMM) in St. Michaels, MD as a shipwright apprentice. Prior to joining CBMM, Kuhn earned her applied science degree from Seattle Central Community College’s marine carpentry program and her BA in fine arts and education from Mount St. Mary’s University in Emmitsburg, Md. Through work with Seattle Shipwrights, Kuhn helped repair and restore a variety of boats including longliners, commercial tugboats and the 54-ft 1930s Stevens-built Sea Dog. She most recently ran a women’s woodworking class at the Center of Wooden Boats in Seattle, Wash. As a shipwright apprentice, Kuhn will primarily work on the restoration of the Museum’s bugeye, the Edna E. Lockwood. During her one-year apprenticeship, Jennifer is living in St. Michaels. Through educational, cultural and interactive exhibits and activities, CBMM celebrates the connections between the Bay and its people while inspiring an understanding of and appreciation for the rich maritime heritage of the Chesapeake Bay and its tidal reaches. The Museum’s campus includes ten exhibit buildings on 18 waterfront acres along the St. Michaels Harbor.