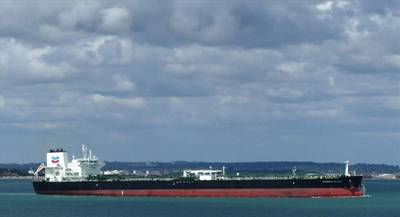 The 500,000-barrel cargo of Hamaca heavy crude, to be loaded at state-run PDVSA's Jose port, comes from the Petropiar oil joint venture operated by both companies.

As of Tuesday, the tanker scheduled to carry the shipment, the Bahamas-flagged Caribbean Voyager, was waiting to load near Jose, Refinitiv Eikon data showed.

Another Chevron-chartered vessel, the UACC Eagle, arrived on Tuesday in Venezuelan waters, the Eikon data also showed, carrying some 500,000 barrels of heavy naphtha that will be used to operate Petropiar's crude upgrader.

Chevron declined to comment on Tuesday and PDVSA did not immediately reply to a request for comment.

The U.S. Treasury Department in November gave Chevron a 6-month license to reanimate and expand operations in Venezuela as a way to encourage talks between the government of Nicolas Maduro and the country's political opposition towards a presidential election this year.

Washington had previously authorized Italy's Eni and Spain's Repsol to recoup pending debts in Venezuela by taking Venezuelan crude for refining in Europe.