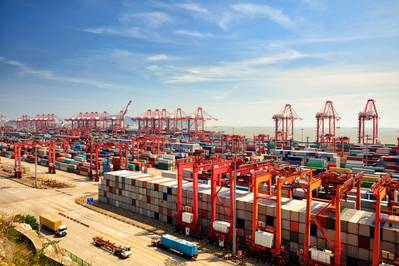 China's exports surged more than expected in July despite U.S. duties and its closely watched surplus with the United States remained near record highs, as the world's two major economic powers ramp up a bitter dispute that some fear could derail global growth.

In the latest move by President Donald Trump to put pressure on Beijing to negotiate trade concessions, Washington is set to begin collecting 25 percent tariffs on another $16 billion in Chinese goods on Aug. 23.

In a statement on its official website late on Wednesday, China's commerce ministry criticised the U.S. move as being "unreasonable", saying it had no choice but to adopt the same measure on an equal amount of American goods ranging from oil and steel products to autos and medical equipment.

Wednesday's Chinese data provide the first readings of the overall trade picture for the world's second-largest economy since U.S duties on $34 billion of Chinese imports came into effect on July 6.

All the same, China's exports for July rose a bigger than expected 12.2 percent year-on-year, showing little tariff impact for now and beating June's 11.2 percent rise and analysts expectations in a Reuters poll for 10 percent growth.

Those demands could get even more strident if the yuan's sharp drop in recent months raises the ire of the United States, which has in the past repeatedly criticised Beijing for manipulating its currency to gain an unfair trade advantage.

Economists say China appears to be taking a more hands-off approach to the yuan, which marked its worst 4-month fall on record between April and July and has provided some reprieve for exporters in the face of the rising trade tensions.

ANZ senior China economist Betty Wang said Beijing will likely resist using its closely managed currency as a tool in the trade war. "Currency devaluation, which may have helped exports to some extent, has been largely market-driven in our view and is not a preferred policy tool by Chinese policy makers as part of the retaliation measures," Wang said.

China's trade with the U.S. also continued to rise in July despite the tariffs, with exports up 11.2 percent year-on-year, and imports increasing 11.1 percent.

Analysts still expect a less favourable overall trade balance for China in coming months given it's early days in the tariff brawl.

Beijing Boosts Liquidity Support
After a strong start to the year, growth in the world's second-largest economy cooled slightly in the second quarter, partly hit by the government's years-long efforts to tackle debt risks.

China's imports rose 27.3 percent year-on-year in July, in a sign domestic demand remains solid, but the worry is that the escalating Sino-U.S. trade war, rising corporate bankruptcies, and a steep decline in the yuan could put a significant dent on the economy.

The government has responded by releasing more liquidity into the banking system, encouraging lending and promising a more "active" fiscal policy.

Several large American companies have said they would adjust their supply chains to source outside of China if tariffs on Chinese goods impacted them, while China's Haier Group said rising steel prices amid hefty U.S. import tariffs was driving up costs for its business in America.

In a sign there may be more difficulties ahead, a private survey last week found that the business outlook among Chinese services firms was the second-weakest on record in July in part due worries about the trade war.

"Stick of Hegemony"
China has repeatedly warned it will strike back against any further punitive measures by Trump, saying the United States is threatening the global free trade order with its protectionism.

Chinese state media, reflecting the government's stance, has said China will not be cowed in the face of U.S. threats.

The latest commentary from state media on Wednesday took a softer line after resorting to personal attacks against Trump earlier in the week, saying China could get through the storm but refrained from directly mentioning the U.S. president.

"Certain people go against the tide for their own private ends and go against morality; the barrier of tariffs wantonly rise, and the stick of hegemony is raised all around," the commentary said.

"Although this may for a moment bring preening with delight, it will make it hard to resolve economic imbalances or out of kilter politics and other deep-rooted problems," it said.

China has not yet given a date for its previously announced retaliatory tariffs on $16 billion in U.S. goods, which will target commodities such as crude oil, natural gas, coal and some refined oil products.

John Neuffer, president and CEO of the Semiconductor Industry Association, said in a statement they were disappointed and puzzled why semiconductors remain on the final tariff list.

"We have made the case to the Administration, in the strongest possible terms, that tariffs imposed on semiconductors imported from China will hurt America's chipmakers, not China's, and will do nothing to stop China's problematic and discriminatory trade practices," he said.