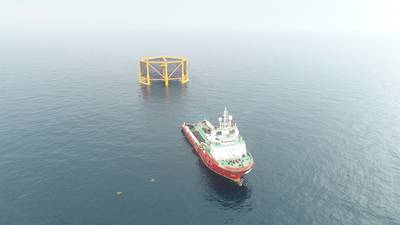 "We own over 200 construction vessels around the world which consume close to about 500,000 tonnes of marine fuel on average each year and we have many more ships on hire," said Jin, adding that the group's oil requirements go beyond just marine fuels and include crude oil, refined products and bitumen used in road construction.

He also said the company could use the joint venture to sell oil it may receive as payment on some of its infrastructure projects.

"In countries where payment issues may arise and there is a need for payment in oil, for example, we want to prepare ourselves so we are able to monetize that," said Jin.

Zenrock, an oil and petrochemicals trader with offices in China and Indonesia, hopes the deal will help its expansion outside Asia.

Zenrock president Xie Chun said the firm is looking to tap into markets including Africa, the Middle East, Europe and the United States because Asia's growing refining capacity is expected to leave the region with an excess supply of refined products such as gasoline and diesel.

"(Through the joint venture, we) expect turnover to be increased to 8 billion in 2019, with a 50 percent increase in traded volumes," said Chun.