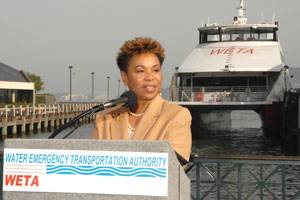 Ms. Haught Johnson applauded the Bay Area for coming together to forge strong partnerships to enable WETA to build a fleet of ferries that are revolutionizing the ferry industry. "Gemini’s innovative design and propulsion technology shows that the Bay Area is on the forefront of environmental innovation. We responded to the concern of local communities for cleaner air and bay protection," added Ms. Haught Johnson.

Other innovative measures include sonar for avoiding whale strikes and floating debris. Additionally, the U.S. Geological Service completed a three-year rafting bird study to enable WETA to operate the vessels with minimal impact on water birds for safety and security, the bridge was raised and eight-foot wide windows were installed to give the operator a 360-degree view.

WETA’s 149-passenger vessel will be put into service on the Alameda/Oakland Ferry and Tiburon routes in January 2009 after modifications to the Alameda and Oakland docks. Gemini will also be available as a spare vessel in case of temporary disruption of transit service or damage to the Bay Area highways and bridges.

Gemini and her future sister vessel, Pisces, were constructed with $16m of funding from Bay Bridge tolls (Regional Measure 2) approved by Bay Area voters in 2004.

Gemini has room for 34 bicycles, 20% more capacity than similar size ferries on the Bay. A spigot and hose was installed for cyclists to wash off sea spray off their bikes. Gemini’s interior design responds to Bay Area commuters’ desire for convenience and comfort. Restrooms are ADA compliant. Passengers will have WiFi accessibility.

The design and construction of Gemini was managed by a woman engineer, Mary Frances Culnane ("Mare"), WETA’s Manager of Marine Engineering. Mare previously supervised tanker construction projects for Chevron Shipping Company and sailed as Chief Engineer for Exxon. She is a graduate of the U.S. Merchant Marine Academy, Kings Point, NY (1980).

Two Washington state boat builders – Ice Floe, Inc. dba Nichols Brothers Boat Builders (NBBB) and Kvichak Marine Industries (KMI) built Gemini. Pacific Power (Washington) provided the propulsion system. Bay Ship and Yacht Company (Alameda) performed a haul out for hull cleaning and final survey. WETA entered into an agreement with the City of Alameda to place Gemini into the Alameda/Oakland Ferry Service. This service is operated by the Blue and Gold Fleet under a contract with the City of Alameda.

WETA is expecting delivery of its next ferry, Pisces, in March 2009. In late 2009, two other vessels are scheduled for delivery. WETA’s four new vessels will launch the South San Francisco-Oakland service in late 2010 and/or the Berkeley/Albany to San Francisco route. They will also be used as spare vessels for emergency response. Environmental and design studies are underway for new ferry routes to Berkeley, Redwood City, Hercules, Richmond, Antioch and Martinez.

WETA is a regional agency created by the State of California to develop and operate an environmentally responsible regional ferry system that connects communities, reduces congestion, and provides an emergency response capability. A board of five members appointed by the Governor and Legislature governs WETA.