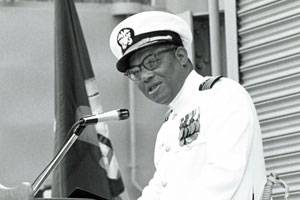 The Navy will christen the newest Arleigh Burke class guided-missile destroyer, Gravely, May 16 during a ceremony at Northrop Grumman Shipbuilding, Pascagoula, Miss.

The new destroyer honors the late Vice Adm. Samuel L. Gravely Jr. He was born in Richmond, Va., June 4, 1922. After attending Virginia Union University, he enlisted in the Naval Reserve in September 1942.

In 1943 he participated in a Navy program (V-12) designed to select and train highly qualified men for commissioning as officers in the Navy. On Dec. 14, 1944, Gravely successfully completed midshipman training, becoming the first African American commissioned as an officer from the Navy Reserve Officer Training Course. He was released from active duty in April 1946 but remained in the Naval Reserve.

Gravely was recalled to active duty in 1949. As part of the Navy's response to President Harry S. Truman's executive order to desegregate the armed services, Gravely's initial assignment was as a Navy recruiter, recruiting African Americans in the Washington, D.C., area. Gravely went on to a Navy career that lasted 38 years and included many distinguished accomplishments.

Gravely was a true pathfinder whose performance and leadership as an African American naval officer demonstrated to America the value and strength of diversity. Gravely's accomplishments served as watershed events for today's Navy. He was the first African American to command a warship (USS Theodore E. Chandler); to command a major warship (USS Jouett); to achieve flag rank and eventually vice admiral; and to command a numbered fleet (3rd).

Retired Adm. J. Paul Reason will deliver the ceremony's principal address. Alma Gravely will serve as sponsor of the ship named for her late husband. In accordance with Navy tradition, she will break a bottle of champagne across the ship's bow and christen the ship.

Designated DDG 107, the 57th Arleigh Burke class destroyer, Gravely will be able to conduct a variety of operations, from peacetime presence and crisis management to sea control and power projection. Gravely will be capable of fighting air, surface and subsurface battles simultaneously and contains myriad offensive and defensive weapons designed to support maritime warfare in keeping with "A Cooperative Strategy for 21st Century Seapower," the new maritime strategy that postures the sea services to apply maritime power to protect U.S. vital interests in an increasingly interconnected and uncertain world.

Cmdr. Douglas Kunzman is the prospective commanding officer of the ship and will lead the crew of 276 officers and enlisted personnel. The 9,200-ton Gravely is being built by Northrop Grumman Shipbuilding - Gulf Coast in Pascagoula, Miss. The ship is 509 feet in length, has a waterline beam of 59 feet and a navigational draft of 31 feet. Four gas turbine engines will power the ship to speeds in excess of 30 knots.