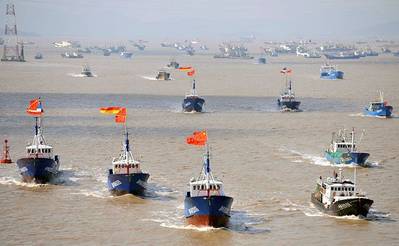 From harassing Filipino fishing boats and monitoring oil exploration off Vietnam to playing cat-and-mouse with the Japanese coastguard, China's expanding fleet of civilian patrol vessels have become the enforcers in disputed Asian waters.

The ships of the recently unified Chinese coastguard are a fixture around the disputed islands and shoals of the South and East China Seas. While the ships don't have the weaponry of military vessels, thus reducing the risk a confrontation could get out of control, they still represent a potent show of sovereignty.

The coastguard is funded by China's State Oceanic Administration, a civilian body, although one U.S. naval officer and security experts said it coordinates its operations with the People's Liberation Army (PLA).

It includes the 200-strong China Marine Surveillance fleet and is seen as another example of how hard it is to get a true picture of China's defence-related spending, the experts added.

Much spending likely takes place outside the defence budget, however, and many experts estimate real outlays are close to $200 billion, second only to Washington. The U.S. Defense Department's base budget for fiscal 2014 is $526.8 billion.

Neither the budget for the marine surveillance fleet, which includes decommissioned warships, nor the overall coastguard is known.

Premier Li Keqiang told the opening of China's annual session of parliament on Wednesday that the government would enhance border, coastal and air defences, but he gave no updates on the coastguard's fleet expansions or operations.

"The maritime surveillance force has been getting a number of new vessels for the last several years, reflecting growing resources and growing importance," said Dean Cheng of the conservative Heritage Foundation think tank in Washington.

"They are large ... and can help intimidate potential opponents."

The State Oceanic Administration and the Defence Ministry did not respond to requests for comment.

Water Cannon and Grappling Hooks
Tensions have grown across Asia as China has become increasingly assertive in pressing its claims to disputed territory.

In the East China Sea, China and Japan are locked in a bitter row over a group of rocky islands administered by Tokyo.

China also claims about 90 percent of the South China Sea. Vietnam, the Philippines, Malaysia, Brunei and Taiwan also have claims to the sea, which sits above potentially rich oil and gas deposits.

Beijing's civilian fleets now routinely flank both sides of the South China Sea. At times they surround the Scarborough and Second Thomas shoals that China disputes with the Philippines, or patrol contested waters off southern Vietnam, close to oil exploration blocks leased out by Hanoi, according to regional naval officers and analysts.

To be sure, China's navy is active across the disputed areas, but is increasingly focused on operations beyond China's near seas.

China sent its sole aircraft carrier, the 60,000-tonne Liaoning, on its first training mission into the South China Sea late last year. China bought the Soviet-era ship from Ukraine in 1998 and re-fitted it in a Chinese shipyard.

But the coastguard is at the sharp end in defending what China sees as its sovereign territory. Chinese media say its ships tend to be armed with water cannon and grappling hooks.

In one of the most recent incidents, Manila protested against the use of water cannon on Filipino fishermen in disputed South China Sea waters on Jan. 27. China said it had every right to respond to "provocative" acts.

"What we are seeing now is the PLA Navy moving into broader areas of ocean and fine-tuning their operational training, including combat, leaving the civilian fleets to concentrate on the most sensitive areas," one Asian naval officer said.

"It is those fleets that represent the daily assertion of Chinese sovereignty in disputed areas - and we watch them like hawks as a result."

The State Oceanic Administration, itself a relatively new body, is charged with administering China's coastal waters and protecting its maritime rights, along with scientific research.

A recent study by Japan's National Institute of Defence Studies, which conducts research for the Ministry of Defence, noted that little was known about the authority and organisation of the State Oceanic Administration or its relationship with the PLA.

In total, the coastguard has 370 vessels, according to figures released last month by the independent International Institute of Strategic Studies (IISS) in London.

The state-owned Global Times newspaper has said the China Marine Surveillance fleet alone had more than 200 vessels, nine marine surveillance planes and 8,400 personnel. It is expected to get 36 new patrol vessels by this summer, the official Xinhua news agency has reported.

Many of the marine surveillance ships are old frigates decommissioned from the PLA Navy. In late 2012, Chinese media reported the navy transferred two destroyers to the fleet. Decommissioning usually removes a ship's weapons.

China is also building a 10,000-tonne maritime surveillance vessel, the world's largest, the Beijing Times newspaper said last month. It did not say when the ship would enter service.

Japan's coastguard, the most technologically advanced in the region, has 389 vessels and 25 aircraft, according to IISS. Japanese officials say they are watching the increasing scope and reach of their Chinese counterparts with alarm.

The State Oceanic Administration said last month it would base a 5,000-tonne ship on one of the main islands it controls in the Paracel chain of the South China Sea, which is also claimed by Vietnam and Taiwan.

Indeed, the civilian vessels were playing the role of "antagonist" in the East and South China Seas, Captain James Fanell, director of intelligence and information operations for the U.S. Pacific Fleet, told a maritime security conference in San Diego last month.

"(They are) harassing China's neighbours while PLA navy ships - their protectors - conduct port calls around the region promising friendship and cooperation," Fanell said in what Pentagon officials later said were his private views.

"We have heard many senior PLA officers say the PLA navy and the Chinese coastguard efforts are not coordinated. This is simply not true. This campaign is being meticulously coordinated from Beijing."