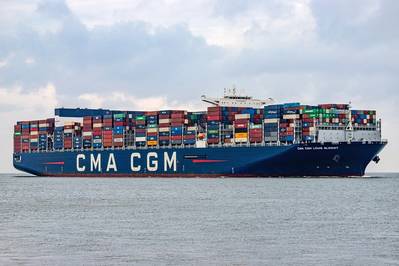 CMA CGM, one of the world's largest container shipping lines, said on Tuesday that it has agreed to acquire two container terminals at the port of New York and New Jersey from Global Container Terminals (GCT), which will extend its presence in a crucial hub for trade.

The deal comes after French-based CMA CGM last month said it expects a pullback in shipping markets to accelerate in the fourth quarter due to high energy prices and flagging consumer spending, resulting a drop in its profitability following an earnings surge in the past year.

Terms of the deal were not disclosed. According to Bloomberg, which first reported the news, the deal could fetch around $3 billion.

In a statement, CMA CGM said acquired ports in Staten Island, New York, and Bayonne, New Jersey, have a combined capacity of 2 million twenty-foot-equivalent units per year, and has a potential for further expansion, up to almost double capacity.

The acquisition "further consolidates our positions in the United States, a major market among the fastest-growing worldwide, and will help us continue our development," Rodolphe Saade, CMA CGM's chairman and chief executive officer, said in a statement.

Like its shipping rivals, CMA CGM has extended its presence along the logistics chain in port infrastructure and non-maritime transport services.

The deal adds on to CMA CGM's previous acquisitions in the U.S. of Ingram Micro's Commerce & Lifecycle Services for $3 billion and a container terminal at the port of Los Angeles for around $2 billion last year.