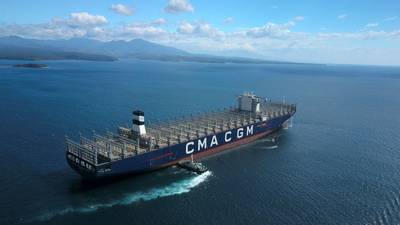 Shipping giant CMA CGM expects to see further growth in its volumes this year as increasing activity from southeast Asia towards the United States helps make up for slowing China-U.S. flows that were a drag on its first quarter.

"We are very confident about seeing our volumes grow in 2019, regardless of the geopolitical climate," Chief Financial Officer Michel Sirat said.

Brisk China-U.S. traffic, partly due to U.S. importers anticipating further tariffs in an ongoing trade dispute between Washington and Beijing, buoyed CMA CGM's activity in the second half of last year.

An easing in China-U.S. flows at the start of this year then weighed on CMA CGM's profitability, Sirat said.

But CMA CGM was also seeing higher volumes from southeast Asia towards the United States, reflecting a shift in sourcing of goods from China to countries like Vietnam in response to U.S. tariffs, he said. (Reporting by Gus Trompiz