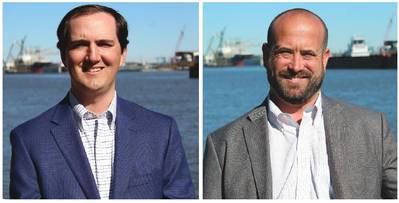 Cooper Marine & Timberlands (CMT) has expanded its logistics and business development team through its promotion of Strickler Adams to Director of Marine Logistics and hiring of Alan Dodd as Director of Business Development.

As Director of Marine Logistics, Strickler will lead the Cooper Marine & Timberlands vessel and barge logistics team, coordinating the movement of the company’s 400+ barges and 20 towing vessels on the Tennessee-Tombigbee River system and Gulf Intercoastal Waterway.

Strickler began his career with Cooper Marine & Timberlands in 2013 as a management trainee, where he first learned the company’s marine operations as a linehaul deckhand. Later, Strickler served as Logistics Coordinator and, most recently, as Sales Manager. Strickler is a graduate of The University of Alabama, where he majored in finance and earned his Bachelor of Science degree from the Culverhouse College of Commerce and Business Administration.

“Strickler has played a key role in growing our inland marine footprint and providing an unmatched level of customer service for our clients,” said Angus R. Cooper, III, President of Cooper Marine & Timberlands. “Strickler’s leadership will ensure that our team continues to provide the efficient, safe, and reliable operations needed to support our customers’ current and future needs.”

Alan Dodd has 17 years of industry experience and joins the Cooper Marine & Timberlands team from T. Parker Host, where he was Commercial Development Manager for Houston, Texas, and New Orleans, Louisiana. Prior to his most recent role, Alan was Operations Manager for T. Parker Host’s Houston operation. He began his maritime career with Norton Lilly International, where he served as Marine Operations Agent in Long Beach, California, Customer Service Representative in Charleston, S.C.; and Port Manager in Tampa, Fla.; Corpus Christi, Texas; and Philadelphia, Pa.

Alan obtained a Bachelor of Science degree from the Culverhouse College of Commerce and Business Administration at The University of Alabama, where he studied Marketing and Computer Science.

“Alan brings with him a wide breadth and depth of industry knowledge and relationships that will greatly complement our commercial development team,” noted Angus R. Cooper, III. “Alan is charged with ensuring our customers are treated with the highest level of service and that we’re consistently meeting their needs and exceeding their expectations. I have no doubt that Alan is up for that challenge.”