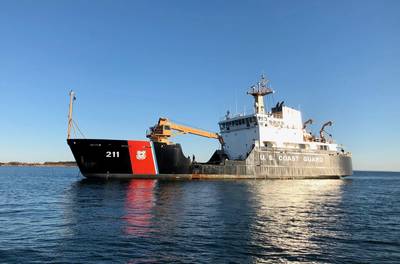 When ferry operators traveling between Orient Point and Fishers Island, New York, first reported the buoy off station on Jan. 17, the U.S. Coast Guard Cutter Oak (WLB-211) was already underway but foul weather kept the cutter from removing it.

This was the beginning of a two-week saga that would involve several Coast Guard units. Like the Loch Ness monster of the Long Island Sound, the 35-foot-tall green buoy was occasionally seen but hard to catch. It would sink and refloat at different places in the channel.

Oak got underway again on January 22, but while the crew was trying to recover it with a grapnel hook, it sank before their eyes.

On Saturday, January 25, Oak crewmembers were recalled and got underway again to retrieve it. When they arrived on scene, it was nowhere to be found. After two days on station, Oak departed to maintain other buoys in the area. On January 28, U.S. Coast Guard Cutter Ida Lewis (WLM-551) responded to another sighting. Ida Lewis crewmembers towed the buoy to shallow water and attached a temporary marker to it.

When Oak hoisted the rogue buoy out of the water on January 29, more than 90 feet of chain was knotted around its concrete sinker. The buoy had drifted almost five miles off station through a congested and narrow waterway.

Oak’s crewmembers removed a hazard to navigation from the Long Island Sound and reclaimed Aids to Navigation hardware worth nearly $100,000. The cutter took the flooded buoy back to Naval Station Newport, Rhode Island, for repairs and marked its assigned position with a temporary lighted buoy.

“The hazardous Valiant Rock buoy recovery epitomizes how ATON is a team evolution,” said Lt. Cmdr. Gordon A. Hood, the commanding officer of USCGC Oak, adding that the crew of the seagoing buoy tender had exceptional support from several partner units.

The buoy is just one of 144 Aids to Navigation (ATON) maintained by USCGC Oak, a 225-foot “Black Hull” or ATON cutter.

Seagoing buoy tenders like USCGC Oak and other ATON cutters help to keep the U.S. maritime economy on course by maintaining the U.S. system of buoys and beacons that save lives, protect property and enable commerce.

Oak services ATON from Buzzards Bay and Nantucket, Massachusetts, to the U.S.-Canadian border.

These Aids to Navigation guide mariners through some of the oldest and busiest ports in the nation, including Boston, Massachusetts; Portsmouth, New Hampshire; and Portland, Maine.

“Oak’s area of operations can be treacherous throughout the year,” said Ensign Emily E. Torsney, a deck watch officer on USCGC Oak. “Nor’easters are ever changing the rocky New England coastline, continuously shifting shoals, eroding dunes and putting aids in danger of coming off station. With the potential for heavy seas and strong currents, it is imperative that Oak leaves every aid watching properly.”

Heavy fog banks often cover northeast waterways during the summer and fall months and significantly reduce visibility, creating challenging scenarios where the crew often cannot see the Aids to Navigation until the buoy tender is alongside them, Torsney said.

“Our crew braves freezing temperatures, reduced visibility and treacherous waters to leverage each valuable minute of daylight to fulfill our mission,” said Torsney, who is from Scituate, Mass., which is located along the coastline in USCGC Oak’s area of operations.

Oak crewmembers are also often called into action to help other ports to recover from hurricanes.

“With heavy lift capabilities, Oak is prepared each hurricane season and has been frequently called upon for hurricane response throughout the years,” Torsney said. “The most recent response came following Hurricane Florence in 2018, when Oak transited down to the Carolinas to assist with the timely reopening of Fort Macon, N.C.”

Like all U.S. Coast Guard buoy tenders, Oak is a multi-mission cutter and has previously conducted other missions to contribute to the safety, security and stewardship of U.S. waterways.

In January, Oak patrolled 80 miles up the Hudson River from New York City to Kingston, New York, in support of Operation Reliable Energy for Northeast Winter (OpRENEW), a U.S. Coast Guard icebreaking operation designed to keep northeast waterways open for the delivery of home heating oil and other energy supplies.

OpRENEW helps to keep northeast residents warm in the winter.

“Of the heating oil used in the country, more than 85% is consumed in the northeast and 90 percent of that is delivered via ship or tug and barge,” Torsney said. “Oak’s ice-strengthened hull is capable of breaking 14 inches of ice at three knots continuous speed, which is critical to supporting this mission.”

According to Hood, the cutter keeps the American maritime economy on course through vital northeast waterways.

“Our primary duty to maintain the U.S. Aids to Navigation System along the rugged New England coastline is critically important to both the region and the nation, as we ultimately promote economic security through navigation safety of the Marine Transportation System,” said Hood, a former chief of the U.S. Coast Guard National Aids to Navigation School in Yorktown, Va.

“I am proud of our accomplishments as a crew,” Hood said. “It is a privilege to work alongside a team of shipmates who honor our nautical vocation, as we together strive to excel in readiness, performance, safety and training. Only as a team can we be always ready to answer the call, to execute the mission.”