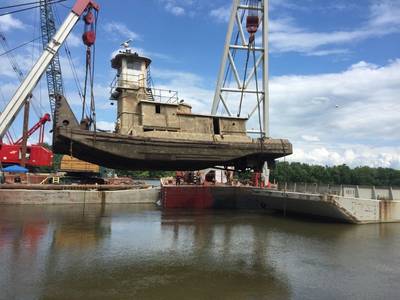 The salvage operation on the Illinois River is now complete. Image: USCG

The Coast Guard has transitioned from pollution response to the investigation phase of a major marine casualty that occurred July 5, 2019, involving three vessels that sank in the Illinois River near Hardin, Illinois.

Coast Guard Sector Upper Mississippi River received a report of three tugboats and a deck barge that were tied together and began taking on water at mile marker 20.7 on the Illinois River. Sector UMR responded to the scene to find all three vessels fully submerged.

The vessels were identified as Chatty Sue Smith, Mary-R and Mary-Fern, owned and operated by Hex Stone, Inc.

The owners reported the vessels contained approximately 4,850 gallons of diesel fuel and oil. The owner quickly took appropriate action and contracted an oil spill removal service to mitigate the spill and deploy containment boom. The owners also hired a salvage company to remove the sunken vessels.

Coast Guard responders remained on scene during the 12-day salvage and recovery operation to ensure responder safety and minimize any potential environmental impact.

Wednesday, the salvage company removed the last of the sunken vessels.

“The vessel owner was extremely cooperative, taking all appropriate measures to protect the navigable waters in which the incident occurred.” Said Capt. Scott Stoermer, commander, Sector UMR “This is an unfortunate situation. However, I am extremely pleased with the efforts of Hex Stone. Their appropriate and quick response minimized any potential environmental impact.”