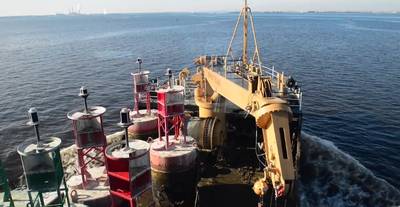 The crew of the US Coast Guard Cutter James Rankin has finished replacing the summer buoys with seasonal winter buoys on the Chesapeake Bay, Md., Friday.

Throughout the month of December the crew replaced 66 summer buoys and removed the Francis Scott Key buoy in preparation for the winter season. The seasonal buoys are kept in until late February or early March.

Ice and snow have the potential to damage, displace and submerge the large summer buoys, which would leave the channel unmarked and could create a substantial hazard to mariners. Displaced buoys could misguide boaters, which might result in groundings or allisions with partially-submerged buoys.

“The summer hulls run the risk of snow and ice attaching to the cages above the water, which would pull the buoys under the ice, under the water and create a significant hazard to navigation for passing ships,” said Chief Warrant Officer Christopher Runt, aids to navigation officer at Sector Maryland-National Capital Region. “Winter hulls are designed to ride better in the ice and don’t have surfaces for the ice to attach to.”

The James Rankin is a 175-foot Keeper-class buoy tender homeported at the Coast Guard Yard in Baltimore.