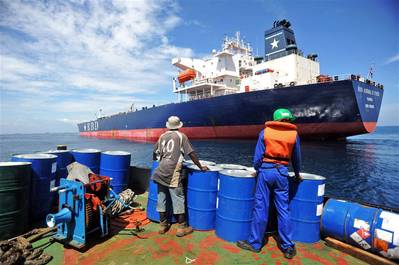 A crew member prepares to board a tanker that was hijacked by pirates in Benin on July 24, 2011. Photo: IRIN/Daniel Hayduk

Secretary-General Ban Ki-moon called on Central African leaders to collectively focus on conflict prevention in the subregion and to fight the threats of piracy and armed robbery at sea, as well as other security challenges.

“This meeting offers a unique opportunity to find concerted and innovative solutions to problems that threaten peace and security in the Central African sub-region,” Mr. Ban said in a message to the 36th meeting of the UN Standing Advisory Committee on Security Questions in Central Africa (UNSAC), held in Kigali, Rwanda.

In the message, delivered by Abou Moussa, his Special Representative and head of the UN Office for Central Africa, Mr. Ban commended the Committee for its “pioneering efforts to address” piracy and armed robbery through the active collaboration with Member States and the Secretariat of the Economic Community of West African States and the Gulf of Guinea Commission (GGC).

Most recently, Western African leaders met in June at the Summit of the Gulf of Guinea Heads of State and Government on maritime safety and security in Cameroon to establish an effective framework to combat piracy and armed robbery at sea.

At the Summit, participants adopted the ‘Code of Conduct concerning the Prevention and Repression of Piracy, Armed Robbery against Ships, and Illegal Maritime Activities in West and Central Africa’, which defines the regional maritime security strategy and paves the way for a legally binding instrument. Mr. Ban and the UN Security Council welcomed the move.

Mr. Ban also said that he was pleased that the Committee’s agenda included the issue of elephant poaching.

“We must fight this illegal and intolerable activity vigorously, particularly given its alleged role in the illicit financing of some rebel groups,” he noted.

In his statement, Mr. Ban noted the establishment of a network to contribute to the fight against terrorism held in the DRC in December 2012. He said the “time is ripe” for a mid-year review of its activities.