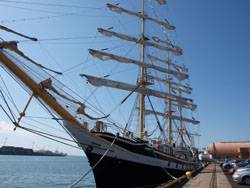 Port-on-Demand took care of training tall ship at every port of call.

Port-on-Demand (POD), the newest service package offered by the global GAC network, has handled the tall ship STS Pallada at every port of call of her voyage to mark the 270th anniversary of Russia’s first settlements in North America and the 50th anniversary of cosmonaut Yuri Gagarin’s first space flight. The impressive 358-foot Russian frigate, owned by the Far Eastern State Technical Fisheries University and used to train navy cadets, was taken care of by GAC’s own offices and approved sub-agents, under the POD umbrella, at every leg of its journey, namely: Kodiak and Sitka in Alaska, Victoria in Canada, the US mainland ports of Seattle, San Francisco and Los Angeles and Honolulu in Hawaii.

The Pallada’s commemorative voyage was coordinated by Keane Nyo, Senior Hub Coordinator at GAC’s Hub Agency Centre in Singapore, who said: “As the STS Pallada is not engaged in commercial activity and has diplomatic clearance, requirements varied from port to port. That meant at every port of call, the agent had to pay particular attention to make sure everything went smoothly. We have the advantage of working with our own office, and good agents at ports where GAC is not represented, as well as excellent relations with local authorities and suppliers. “Most cities were delighted to welcome STS Pallada and in some cases, the authorities waived docking dues and suppliers gave discounts for provision and services during the ship’s stay in port.”

One of the ports where fees were waived or discounted was Los Angeles, where the Pallada was handled by GAC Port Manager Pieter Moerman and Boarding Agent William Mallow. They also liaised with many different parties - including the Russian consulate, the Los Angeles Russian community, the local Chamber of Commerce, Los Angeles Maritime Institute, Space X and California State University – for a series of events to mark the Pallada’s call to Los Angeles. Mallow says: “Handling this impressive tall ship was very different to assisting the tankers and bulkers we see regularly at the port, and it was a big learning curve. It was enlightening and enjoyable to work with so many different parties - everyone pulled together to make this a memorable call for both the community and our Russian guests.”