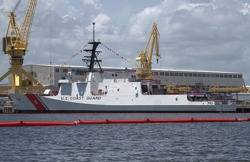 Stratton is named for Capt. Dorothy Stratton, who became the first director of the U.S. Coast Guard Women’s Reserve, known as the SPARs, in 1942. Approximately 40 SPAR veterans attended today’s commissioning ceremony and were recognized for their service.

Stratton is the Coast Guard’s third 418-foot Legend-Class National Security Cutter and the first of its class to be named for a woman. These new cutters are replacing the 378-foot Hamilton-class cutters that were commissioned between 1967 and 1972. Legend-class cutters have more endurance and state-of-the-art systems that enhance the Coast Guard’s interoperability with Department of Defense and Homeland Security partners.

Among its many missions, the Stratton will provide a presence in the Pacific Ocean near Central and South America to protect the United States from illegal drugs and associated transnational crime. Stratton will also patrol the Gulf of Alaska and Bering Sea to protect these fishing grounds from poachers, ensure compliance with U.S. fishing regulations and respond to mariners in distress.