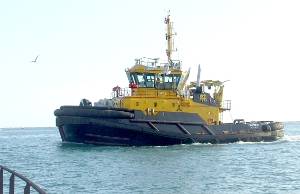 The first of Class RAstar 2700 tug Cheradi was delivered to its owners, Rimorchiatori Napoli of Naples by the San Marco Shipyard of La Spezia, Italy in late September 2009.  The adaptation of the RAstar hull form to this size of hull was a logical progression for the designers, Robert Allan Ltd. of Vancouver, Canada.  As the originators of the "Compact Tug" concept, and as the developers of the RAstar hull form, the combination of the two was stimulated by the demands of this owner for a very high standard of towing and escort tug but in a tug which had to be under 28 metres in length for regulatory reasons.  The Cheradi is the first in a series of four tugs ordered by this owner.

These new tugs will be used in the coastal ports of Italy served by the owners.  They are classed for both harbour and coastal duty.

Propulsion comprises a pair of Wärtsilä 6L26A2 diesel engines, each rated 2,040 kW at 1,000 rpm, and each driving a Lips model CS250-s/WN-K Z-drive unit with a 2,600 mm diameter propeller through a Cardan shafting system.  This combination delivered a Bollard Pull of 76.1 tonnes ahead and 70.7 tonnes astern on trials conducted in late December, 2009.  A free running speed of 13.5 knots was recorded.  This performance was assured as a consequence of an extensive series of model testing undertaken at Vienna Model Basin under the direction of Offshore Research Ltd. of Vancouver on behalf of Robert Allan Ltd.  Although model testing of tug designs is rare in this size range, due to the size and power of this tug, as well as a requirement to achieve maximum escort capability it was considered beneficial to conduct these tests and thus satisfy the shipyards' concerns regarding performance guarantees.

In common with all the RAstar series, this new tug is expected to far out-perform its typical wall-sided competition, offering far superior escort towing performance, and reducing roll motions by at least 50%.  The model testing predicts indirect steering forces in excess of 100 tonnes at 10 knots for this design.  The RAstar hull form is also far more energy-efficient, as the reduced waterline beam reduces free-running resistance considerably in comparison to old style tugs of similar overall proportions.

The RAstar 2700 Class tugs are outfitted for a crew of six persons, in modern and well-equipped accommodations, all above main deck. The main hawser winch is a double drum, hydraulic winch supplied by Romagnoli of Italy.  The aft deck is equipped for harbor towage with the fitment of a radial arm towhook with a 70 tonne load rating.  The obligatory anchor is stowed aft, out of the way of the main working deck forward. Electrical power is provided by a trio of Volvo gen-sets, 2 x 160 eKW, 1 x 90 ekW.

The tug has a full Fi-Fi 1 rating in accordance with Class notation requirements.  The fire pumps are driven from the front end of the main engines through a Kumera gearbox, which also drives the main hydraulic pumps, powering the winch.