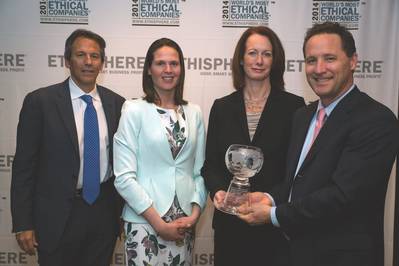 For the third consecutive year, Holland America Line, together with sister line Seabourn, was named among the World’s Most Ethical Companies by Ethisphere Institute, a leading business ethics think-tank. The company secured its spot on the list by implementing and maintaining business practices and initiatives that are instrumental to company success and benefit the community.

Named in the Leisure and Hospitality category, Holland America Line/Seabourn is one of 144 total honorees representing 41 industries from around the world.

“It is an honor to be named to the World’s Most Ethical Companies for the third consecutive year,” said Stein Kruse, president and CEO of Holland America Line. “We take pride in promoting ethical business standards and practices both internally and in the community, and to be recognized on such a prestigious list validates our efforts.”

“The entire community of World’s Most Ethical Companies believe that customers, employees, investors and regulators place a high premium on trust and that ethics and good governance are key in earning it,” said Ethisphere’s Chief Executive Officer, Timothy Erblich. “These companies join an exclusive community committed to driving performance through leading business practices. We congratulate everyone for their extraordinary achievement.”

This is the eighth year Ethisphere has published the World’s Most Ethical Company rankings. Ethisphere reviewed hundreds of companies and evaluated a record number of applications utilizing its proprietary methodology through in-depth research and multistep analysis, naming the companies that surpassed their industry peers to this year's World's Most Ethical Companies list. The 2014 list features companies in more than three dozen industries, including several headquartered outside of the United States.