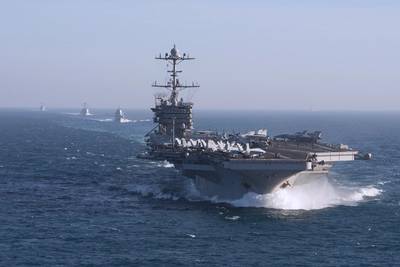 HSTCSG got underway Feb. 1, to participate in COMPTUEX - a series of training scenarios that tested the strike group's abilities in multiple categories including air warfare, strait transiting, visual information, responses to surface and subsurface contacts, electronic attacks and more.
According to Rear Adm. Kenny Whitesell, commander of Carrier Strike Group (CSG) 4, which mentored and assessed HSTCSG throughout the exercise, COMPTUEX provided dynamic learning opportunities for the strike group.
"Every COMPTUEX is a little bit different," said Whitesell. "We are a learning organization. Unfortunately, our threats are adapting as fast as we learn. This requires us to increase the complexity, the volume, and the difficulty of the exercise so that we prepare the Harry S. Truman Strike Group and its coalition partners for deployment."
COMPTUEX demonstrates that Sailors are ready for deployment by evaluating their skills in a variety of scenarios while building cohesiveness with the other units involved. Although the team trains for specific tasks, the familiarity will allow the strike group to be ready for a variety of potential threats or situations.
"This crew has been tested under the most difficult environment, the toughest scenarios and against the most threatening enemy," said Whitesell. "This strike group can perform anywhere in the world. They are world-wide deployable and will be successful as a carrier strike group based on what they have accomplished over the last 28 days."
"Throughout this exercise, I've seen all elements of our strike group - the flagship, the air wing, the destroyer squadron and USS Normandy - come together as one team to tackle even the most complex warfighting scenarios," said HSTCSG Commander Rear Adm. Gene Black. "The Harry S. Truman Carrier Strike Group is trained, and we are ready to answer our nation's call."
Truman is currently moored at Naval Station Norfolk conducting preparations for deployment.