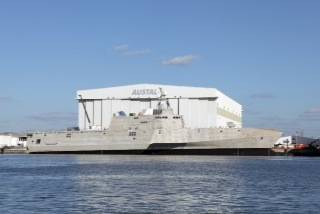 The diesels are considered the highest power high-speed diesel engines in the world. Delivering up to 12,200 bhp (9,100 kW) of continuous power, MTU's Series 8000 offers a fuel consumption of less than 190g/kWh, while achieving IMO MARPOL NOx emission certification.

In reaction to the success of this important event leading up to LCS 4 sea trials, Craig Perciavalle, Senior Vice President of Operations, commented, “This achievement could not have been accomplished without the hard work and dedication of the great employees here at Austal, as well as support provided by our Navy teammates. It’s always exciting to see a great war ship come to life and to witness the pride and passion of those making it happen.” Added Perciavalle, “This is a significant milestone in preparation for sea trials and subsequent delivery.”