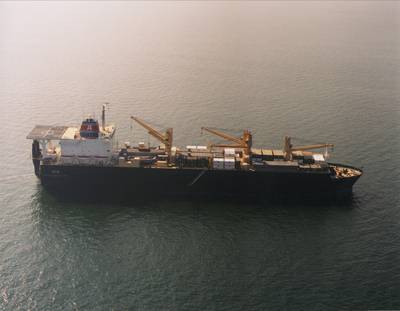 Button is the flagship of Diego Garcia-based Maritime Prepositioning Ship Squadron Two, which has a current fleet of 12 noncombatant, government-owned and -chartered cargo ships that carry military equipment and supplies for rapid delivery to U.S. forces ashore in the event of a contingency or humanitarian operation.

These ships are crewed by civilian mariners working for private shipping companies under contract to MSC. Button carries a U.S. Navy active-duty staff of 10 personnel led by a U.S. Navy captain who is responsible for the tactical control of all squadron ships. MPS Squadron Two also has a civil service medical service officer and four contract personnel responsible to maintain equipment on board.

Button anchored off Male on Dec. 11, beginning the second port visit by a U.S. naval ship to the Maldives this year. The Maldives are a group of 26 atolls located off India’s southern tip. Guided missile destroyer USS Russell visited the southern Maldives in September. Engaging with senior Maldivian officials was a primary goal of the visit. Navy Capt. Charles “Gene” Emmert, commander, MPS Squadron Two, along with representatives from the Defense Attaché office for Sri Lanka and the Maldives, paid an office call with Col. Mohmed Ziyad, the plans and operations director for the Maldives National Defense Force at its national headquarters in Male on Dec. 12.

“Conducting joint training and exchanging information is very useful to us,” said Ziyad.   “We hope Button’s visit here leads to an increase in U.S. Naval ships visiting our country.” The Maldivian National Defense Force is composed of a coast guard, a marine corps, and a support corps that includes intelligence, medical and logistics elements.

Emmert later visited with Col. Ismail Sharif, principal director of the Maldivian Coast Guard. During the meeting, Sharif provided an overview of his nation’s coast guard and discussed the possibility of increased bilateral cooperation and training in the future. The Maldives has more than 640 kilometers of coastline.

“Building and fostering relations is what this visit was all about,” said Emmert. “That’s been easy because the Maldivians are very friendly and open people.” Later, Emmert and MPS Squadron Two’s medical service officer and civil service mariner David Larkin visited two local hospitals in central Male, touring the Indira Gandhi and ADK hospitals, speaking with administration officials and hospital staff along the way. “We wanted to assess the local hospitals’ capabilities,” Larkin said. “We are forward deployed to a remote part of the world, and, if we are underway and close to Male with a sick or injured crewmember on board, I would now feel comfortable sending them here for treatment.”

Later that day, nine crewmembers from MPS Squadron Two and seven from the Maldives National Defense Force picked up litter along a half-mile stretch of beach on Kaffu Villigli, an atoll about a mile off Male. Before the cleanup, MPS Squadron Two and Maldivian military personnel shared a meal of local cuisine to get to know one another a little better. “This was my first time working alongside U.S. personnel,” said Lt. Hassen Nadhoon of the Maldivian Coast Guard. “It’s a new experience, but very rewarding.”